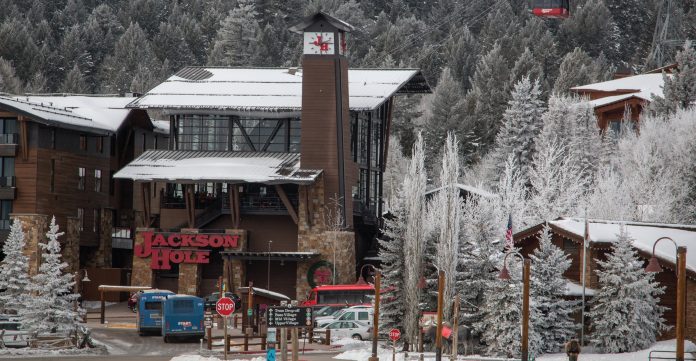 We Parkites spend our days living as locals in a tourist town; well-versed in the inroads to cheap (and tasty) dining, powder shots a week after a storm, free ski tune-ups in trade for beer, a season pass for walk-up runs at 10 a.m.

We wear clothes that don’t match, goggles no matter how sunny. We carry skis over our shoulder, tips forward, and we never EVER pay full price for anything if we can help it. It’s hard to leave our routine for another ski resort where we might have to be guests without discounts.

Enter the Epic Pass, Mountain Collective and the brand new Ikon Pass to lure Utah season pass holders out of our comfort zone and into other ski realms. It’s ﬁnally time to turn the tables, becoming tourists ourselves now that it’s cost enticing.
When you want to leave Utah but still be close enough to spit, the two free Mountain Collective tickets and seven free tickets on the Ikon Pass to Jackson Hole make a weekend to Wyoming a no brainer.

CONSIDER THE FACTS
Jackson Hole Ski Resort is a mere fi ve hours north. It’s a quick enough jaunt to satisfy road warriors corralled by the winter swell, but far enough to feel like a getaway. Th e roads (even in a blizzard) are relatively navigable, the lodging reasonable, the restaurants are on par with Park City’s and the snow quality superior. And now the lift tickets are cheap…er.

Check it out…
Friday at 4pm, head east on I-80. You race toward the freedom of Wyoming: land of cowboys, real beer and 10,450-foot Rendezvous Mountain peak. Jackson may fall short of Utah’s annual Cottonwood Canyon snow depths but in recent seasons has surpassed the snowstakes in Park City.

There’s something for everyone in Jackson Hole, especially the rippers. Th e instructors know the mountain like a freeride pro so unless you know a friendly local, it’s worth the money hiring a guide the first day to find ideal terrain for your level. They are your guides, your trust-fall champions, your motivators. They’ll push you to explore new terrain and cultivate those tales to bring back to Utah.

Checking In
Snow King Resort is the locals race hill but, it’s also a huge hotel with dog-friendly, condos and rooms, a restaurant and bar. If you’re wanting something with more character though, Jackson has everything from a Four Seasons Resort to a Motel 6. Faves include the White Buffalo, Elk Refuge Inn, Springhill Suites and the Fireside Resort. Aft er settling in, you could night ski or snow tube or just hit the town for a gallery stroll and grub. But don’t stay out too late as you have an early shuttle to catch to Jackson Hole Mountain Resort. 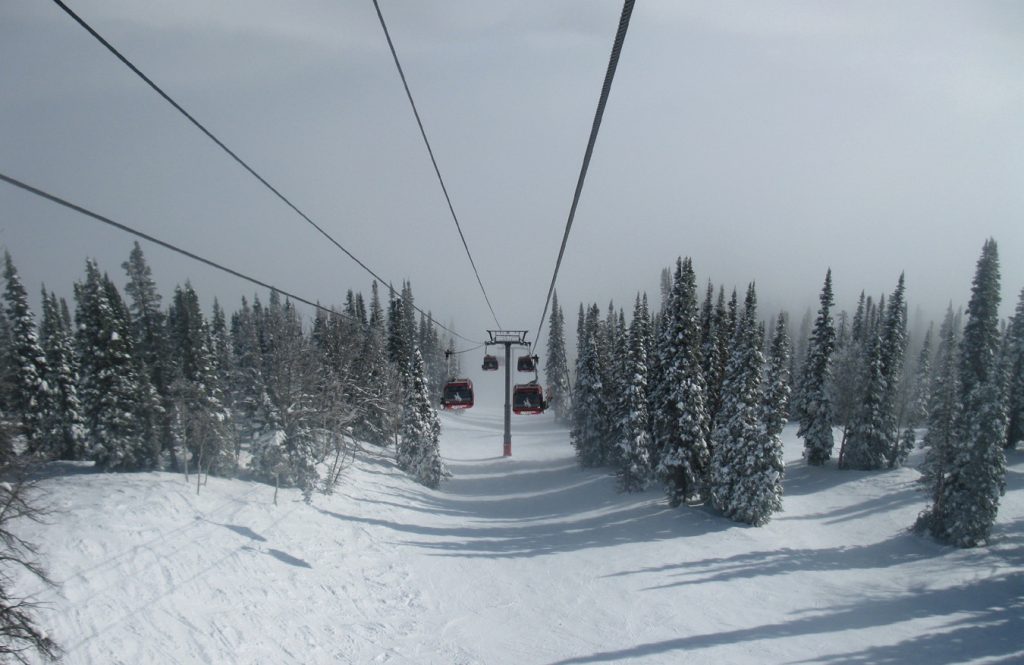 Day One
Stash the kiddos with either Wrangler Daycare (6-months to two-years-old) or the highly rated Kids Ranch ski school then head over to the Mountain Sports School to find your own coach. In Utah, locals don’t take “lessons” but you’re not in Utah. Who knows more about ripping skiing and gnarly terrain than Jackson’s badass instructors? Jackson is a place where you get out of your comfort zone. It’s nice to have someone holding your hand. From Cheyenne Woods, Bivouac Trees, Moran Woods to the steep Alta and Tower Chutes, the mountain hones your three Ts- technique, tactics and terrain.

You’ll climb the “Greatest Continuous Vertical Rise in the U.S.” in 12 minutes riding the Jackson Hole Tram and then face 2500 acres of expansive, mostly-advanced trails. Because JHMR is so close to Park City, you simply have to track the storms to hit those epic snow days. Th e on-mountain food is expensive so plan to splurge for a noodle bowl or wrap or pack a lunch and save your money for après.

Before the lift s even close you’ll be whining for a beer at the Mangy Moose Saloon or the Alpenhof. Th ere are a few yummy spots in Teton Village like Teton Thai and the Handle Bar or you can dine at one of the many delish spots in the town of Jackson then check out the Million Dollar Cowboy Bar, Hole Bowl, Th e Rose, the Silver Dollar Bar in the Wort Hotel and the Stagecoach in Wilson. Then get to bed before dawn!

Day Two
Wake up, grab a breakfast burrito from Down on Glen and repeat your ski day. If you’re not staying in Teton Village and your hotel doesn’t have a free shuttle, drive to the Stilson Lot and ride the town bus for free. Try not to après at the end of the day because you do have a tired drive back. But the body buzz you’ll feel for the next five hours will remind you why you took up skiing in the first place. Thanks to the new pass options, you too can be an enthralled tourist and find the joy of Jackson Hole.

FOR THE NON SKIERS

HERE ARE A FEW TO START WITH ... ZIPLINE Soar across the longest over-water zipline. TRAIN Ride in President Truman's original train car or participate in a live...
Activities + Adventures

A WEEKEND ADVENTURE IN PARK CITY With its unique combination of rich history, community, adventure, modern luxury and of course its jaw-dropping views, Park City...
X