Although there are many reasons to feel pride in taking part of the mountain community of Park City, there is perhaps none more so than the annual celebration of the National Ability Center’s Red,
White & Snow event. And it’s not just the Park City community who participates—supporters from around the country and world arrive in grand numbers to support a cause worthy of all the attention.

Perhaps it’s because this organization embodies the Park City spirit in so many ways. It’s about life-changing opportunities, overcoming limitations and the power of possibilities. For over 25
years, the National Ability Center (NAC) has provided activities for individuals with disabilities to foster skill development, broaden attitudes and challenge stereotypes. Reaching participants from 47 states and 11 countries just within the last year, the NAC empowered more than 2,500 children and adults impacting nearly 10,000 caregivers, community and family members.

The Vintner Dinner Experience
Known as a favorite of the weekend’s spectacular events, a series of private dinners are hosted in exquisite homes throughout the Park City area. Top-notch chefs are paired with exceptional winemakers to present an absolutely unforgettable evening for their guests.

It’s a Family Affair
Keith and Nancy Rattie graciously opened their stunning Park City home to host one of the 21 fabulous vintner dinners that occurred during this year’s events. They have both been involved with the NAC for many years and described some of the reasons they were honored to participate again, “You can truly see the impact of the NAC’s programs and the way they can transform lives and families. Across the country, it’s become a model for helping people overcome challenges,” said Keith Rattie. His wife, Nancy, who served on NAC’s board for six years explained, “The NAC has an incredible ability to make families become one again. Although many organizations focus only on the individual with disabilities, the NAC has a way of bringing the whole family back together again.”
Anna Beninati, a participant of the NAC, and an honored guest and speaker at the vintner dinners, describes her experience, “The support from the community has been overwhelming, just seeing how many people are behind our mission.” When asked how the NAC has changed her life, she replied, “They have taken me from a recreational skier to a ﬁnely tuned racer looking forward to the 2018 Paralympic Games.”

The Power of Partnerships
Each year, the vintner dinner chefs bring their time and culinary expertise to grand tables across Park City. Executive Chef Carl Fiessinger from 350 Main described what this event means to him. Recently, his friend was paralyzed while serving overseas as a Marine. “This one really hits home for me because I have personally seen the diﬀerence the NAC has made in his life,” said Fiessinger. Fiessinger can also be found playing sled hockey at the NAC, an experience he describes as both humbling and inspiring. While the rest of this page could be ﬁlled with the scrumptious details of the dinner prepared by Chef Fiessinger (not to mention the mouthwatering menus of the other 20 NAC vintner dinners occurring simultaneously throughout town that evening), here’s just a taste: an amazing amuse bouche of charred lobster tail with bisque; a stimulating starter of fried foie gras with a walnut waﬄe and peach syrup; a blood orange sorbet with mint caviar as the perfect palate cleansing intermezzo; a Bergamot roasted Utah lamb loin entrée; a spring pea ﬂan; and a marvelous chocolate pudding with chocolate pistachio tuille, hazelnut ganache and vanilla compressed strawberry carpaccio. 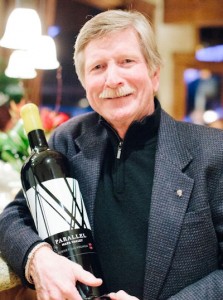 Perfect Pairings
The founders of Parallel Napa Valley certainly understand the value of collaboration. Their success is the result of eight close friends in Park City who joined forces to create exceptional wines. They have also always understood the value of giving back to the community they love. As longstanding supporters of the NAC, Parallel Napa Valley partners Mac and Anne MacQuoid have been involved since its inception, and have been amazed at how it has evolved over the years. “Of all the organizations we work with, we can really see how our participation with NAC makes a diﬀerence,” said MacQuoid. “It’s hard to describe the life changing impact of their work. We’re honored to be a part of this organization.” This year, 25
exceptional vintners from around the country supported the NAC by pairing their wines, as well as sharing their time and expertise.

The Grand Finale
Red, White & Snow is concluded each year with a grand gala and auction. Hosted again this year by Montage Deer Valley, guests were deﬁnitely given the red carpet experience. The evening was ﬁlled with beautiful wines, amazing food, inspiring speakers, Grammy award-winning musical talent, and a show of impressive ﬁnancial support during the evening’s silent and live auctions. This year, the NAC’s combined three-day wine, culinary and ski festival raised more than $900,000.

The entire annual event is a perfect toast to the NAC’s mission to empower people of all abilities to reach their greatest potential. Their outlook is one that sees individuals not by their limitations, but instead by their capacity for limitlessness.

Dining Under the Stars