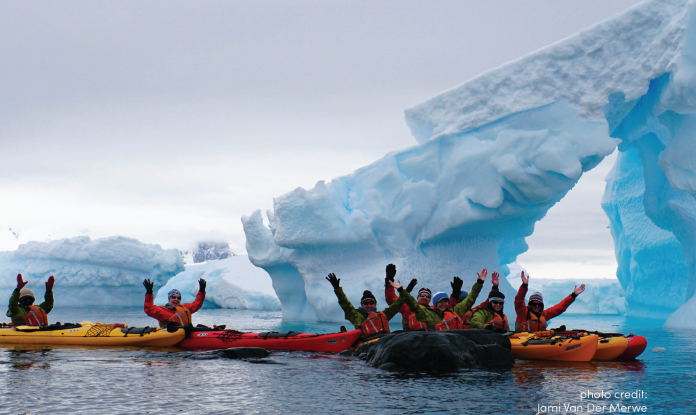 Full disclosure: I know exactly how privileged, if not elitist, this sounds, but I don’t know how else to say it: when it comes to traveling, I’m difficult to impress. African safari? Been there, done that. Diving in the Maldives? Overrated. Climbing in the Himalayas? It was ﬁne. Backpacking around Europe? That was soooo gap year 1999. Admittedly, it takes an unreasonable amount of awe and adventure to get me excited about a destination. That’s the downside of being a travel junkie—each trip requires more than the last one to get you high. 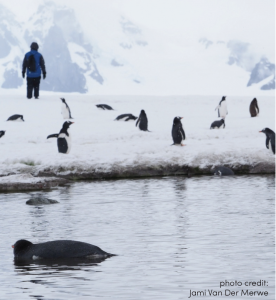 So when I learned I would be to traveling to Antarctica with Aurora Expeditions, it took me a moment to recognize the feeling in my gut—giddiness. It had been a long time since travel plans had me feeling eager to pack a bag. A confusing reaction for many, it turned out.

“I’m going to Antarctica!” I’d exclaim when someone would ask me where I was off to next. My enthusiasm was often met with head tilt, furrowed brow and one of two questions: “Are you a scientist?” or “Just how old are you?”

For a lot of Americans, even the most well-traveled, Antarctica isn’t considered a practical tourist destination. The common misconception is that the land of snow and ice is a place reserved for glaciologists and documentary film makers. Or that it’s a destination to be seen from the safety and comfort of your passing cruise ship, filled with your fellow retirees.

Neither could be further from the truth.

I was pleasantly surprised to climb aboard my expedition’s icebreaking ship and find a mix of passengers from their 20s to their 70s. Even more satisfying was that our passenger list was made up of at least half a dozen single women, all balking at any notion of tradition, and instead catapulting themselves toward unknown adventures. These were my people. It helps that Aurora Expeditions is one of the world’s few tour operators that caters to singles and doesn’t charge an extra fee to those flying solo. Collectively, the 61 humans onboard represented 15 countries, five continents and one universal craving—to become members of travel’s most coveted and exclusive society—The Seven Continents Club.

And while we all received that invisible membership card, it didn’t come with the egotistical satisfaction most of us assumed we’d earn by stepping on our final continent. Instead, we learned membership dues are paid in humility—the only acceptable currency.

That’s largely because Antarctica is the last place left on this planet where man is not in control and nature dictates all decisions. Itineraries are shaped by calving glaciers, floating icebergs and migrating humpbacks. Time ashore is dependent on the current mood of a herd of elephant seals. You can participate in activities like polar snorkeling, diving or kayaking, but you better first get permission from the leopard seal patrolling the same icy waters.

It takes a few days to adjust to this switch, where nature is both raw and totalitarian. There are times you must remind yourself you’re not staring at a painting; those hues of blue exist outside of a manmade palette. This is the natural world, in its most authentic state. And that’s what’s so special about Antarctica—nothing is manufactured. It is not supplemented or enhanced. It doesn’t need to be. The seventh continent is nature in its purest and most untouched form. Unsettled, untamed, undefinable.

Th e wildlife is charismatic, curious and unabashedly welcoming of the relatively few humans it encounters. Th e animals graciously extend an invite into their lives, and often, there is no option to decline.

“The penguins are essentially teenagers this time of year,” Aurora’s on-board naturalist and marine biologist Roger Kirkwood informed us during a presentation at sea. “Their parents are gone for longer periods of time now and the juveniles are exploring their environment. It’s important to always give them at least five meters of space. But realize if you sit down or stand still, there’s a good chance they’ll come over to investigate you. They haven’t read the rule book yet!”

They’ll also examine your camera gear, peck at your shoes, misbehave to get your attention and sometimes fall asleep close by. Try as you might, it’s a challenge to distance yourself from an affectionate and inquisitive penguin chick.

“Most of the wildlife in Antarctica is quite curious about humans,” Roger advised us before our first on-shore outing. “They’re just as interested in us and we are in them.”

his statement wasn’t limited to penguins looking to make new friends. In fact, every day of our 12-day journey we enjoyed encounters with wildlife we swore could never be outdone, only to later be proven wrong.

In Paradise Bay we spent several minutes admiring a pod of humpback whales, casually blowing air in the distance. When they silently slipped underwater, we assumed they moved on, perhaps too shy to enjoy all the attention. Moments later, they appeared again; like stealth submarines, headed straight for our idling Zodiac. As if we had carefully choreographed it, everyone onboard inhaled simultaneously—an unspoken understanding we were not in charge of what happened next. The whales circled us several times, rising from the sea nose first for an above-water view. When they finally arched their backs and flicked their tales to disappear, my fellow Zodiac passenger, Joe O’Dea, began looking for a towel. “I need to wipe whale snot off my face,” he explained.

Days later at the south end of the Lemaire Channel a mischievous leopard seal played hide-and-go-seek with kayakers, seeming to get a kick out of our inability to correctly guess where he’d next emerge. Occasionally, he gave hints by tugging on our paddles under water.

Near the Yalour Islands, a pod of crabeater seals normally content to pass their day resting on a drift ing iceberg caught a glimpse of a snorkeler. When they saw the snorkeler’s underwater camera, they slipped into the water and proceeded to photobomb every one of his shots.

These beautiful, humbling and sometimes comical rendezvous with the wildlife of Antarctica were interspersed with memorable human encounters too. Crossing the Antarctic Circle together was celebrated with a champagne toast and a ceremonial oath. More than half of the passengers, author included, launched themselves into the icy waters for the ultimate #YOLO moment—the Polar Plunge. We took turns being deposited onto icebergs where we spent time reflecting or participating in a pop-up yoga class. When we weren’t engrossed in deep conversation with one of Aurora Expeditions incredible polar experts, we collected floating ice for evening cocktails, played games after dinner and even had a dance party on the ship’s deck.

And while there was great fun had, friendships formed and unforgettable, awe-inspiring moments with nature, the reality is, Antarctica can’t be described. It must be experienced. No amount of literary talent can fill the gap between reading about the continent and stepping on it.

There, you will sit silent with the Earth and listen to the universe as it speaks with deafening assurance. All of your senses will be stretched beyond what you previously imagined possible. In Antarctica, you don’t just feel the ground shake as a massive iceberg cracks and splits, your entire body rattles to its rhythm.

You don’t simply hear the bark of a fur seal as it mock charges you across a rocky beach, adrenaline throbs and echoes in your ears. Your eyes learn to adjust to ever-changing light; a kaleidoscope assembled entirely by colors previously unknown. Th e salty water isn’t licked off your lips, it is inhaled because your mouth is agape at the sight of a leopard seal emerging from the water to snatch the penguin you’d been admiring just seconds before. And those penguins? You don’t just smell a colony. You wear the scent.

Antarctica demands full immersion of your senses. Even more, it deserves the attention it commands. And even better, Aurora’s guides act as a sixth sense for their passengers, providing an effortless awareness and enlightenment that amplifies your wonderment. Even after decades of leading expeditions, the novelty hasn’t worn off for them. They were still as spellbound as those of us seeing Antarctica for the first time. Because in some way, every moment in Antarctica is new and unexperienced. The landscape, the wildlife, the light—it’s all constantly changing—different from one blink to the next.

And that was the experience I craved—intimate, customized and jolting. One where I could freely engage with experts who knew me by name and be surrounded by new friends willing to be rendered speechless and forever changed by their wanderlust.
Aurora Expeditions delivered an experience that justified my giddiness. It’s the ultimate high.

To learn more about trips to Antarctica and Aurora Expeditions: aurora-expeditions.com 888.485.5080

PARK CITY WINTER SPORTS FOR THE EXTREME Park City ﬁrst made a name for itself due to the massive and valuable ore deposits hiding beneath...

ALL LEVELS WELCOME - Park City Cross Country Trails With over 70 kilometers of groomed trails, Park City has long been a destination for cross...
Activities + Adventures