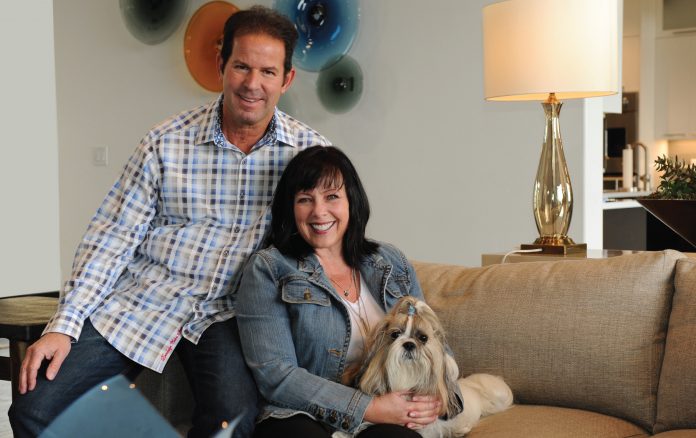 How One Local Couple Buys, Builds and Sells in Park City

This is a story about timing, business smarts and good taste; a tale of two people who merged their talents and passions into a successful business model and thriving marriage with happy clients to boot.

Larry and Heather Feldman met in Southern California and fell in love back when the freeways weren’t quite so crowded. While the married couple was living in an $180,000 townhome in Irvine, Heather got pregnant, spurring a desire to expand their living space. Unable to afford the million-dollar-plus homes in fl ashy Newport Beach and Irvine, Heather, a rookie realtor on the fast track to success, had a feeling about sleepy San Clemente and discovered an undeveloped area. “It was just a dirt road at the time, but I said to Larry, ‘Th is is the next place for people like us who can’t afford Newport Beach, but still want to be at the beach in Orange County.’” They bought a lovely home in the Talega Community, sold it two years later and doubled their money. And then they did it again. And again. And again. And now, two decades later, they’re perched high atop Park City in a 7200-square-foot, multimillion-dollar dream house with mind-bending, 180-degree views of Park City, all three ski resorts and the Uintas…with no mortgage!Jealous, right?

“People constantly say to us, ‘You’re so lucky. I wish I could do what you do,’” chimes Heather. “But in reality, not everyone is willing to do the steps it takes, like moving a hundred million times and living in less-than-luxurious places while you’re building. But it’s something we don’t mind doing.” 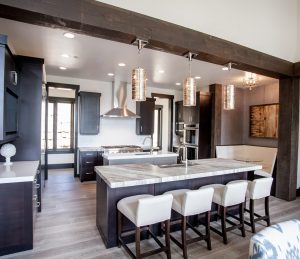 The couple fell in love with Park City over a festive 4th of July weekend back in 2004 when Larry, a former public relations expert and writer, had an assignment as a golf journalist. Smitten with the alpine lifestyle, they bought a “someday lot” in Mountain Ranch Estates shortly thereaft er. Two years later, when their son Daniel turned fi ve and their SoCal home’s value went through the roof, they decided to cash out and make the move to the mountains as a developer/realtor team.

So, what’s the secret of this couple who now builds and sells custom homes on a highly successful yet personal scale? “We found from the beginning as far as home styles and choices, we agree on everything,” proclaims Heather. “And 95% of the time he lets me do what I want with the home,” she laughs. “Of course, sometimes we want to kill each other when working together, but it’s not very often.”

A yin yang vibe also seems to balance their relationship. “Heather’s very conservative and I am the risk-taker,” explains Larry. “She’s always worried how we will pay for everything.”
“So, he talks me off the ledge and that’s a huge bonus,” she admits. “She’s the frugal one, which is great for me because I’ll just buy, buy, buy if you let me have my way,” chuckles Larry.

But it’s also been the couple’s ability to identify the right place at the right time, which led to their remarkable trajectory in Park City. Aft er her success in Orange County as a top agent, Heather rebuilt her career in Park City as the total sales leader for Equity Luxury Real Estate Group in 2013-2016, and now has minority ownership with Keller Williams Park City. One wonders if she has the gift of foresight or a crystal ball with her myriad of on-the-money calls real estate-wise. “A lot of it is just nonstop hunting down properties on and off the MLS, watching trends in our area and looking at what properties and neighborhoods are selling, but I also trust the feeling in my gut about what will pop next.”

“Heather was spot on about Old Town,” commends Larry. “It was the year before Vail Resorts came in with rumors of buying Park City Mountain Resort and combining it with The Canyons to make it the nation’s largest ski resort, and she thought, “If this goes through, it’s gonna be a dynamite keg going off . And she was right.”

Gavin Steinberg, a Manhattan-based developer and real estate investor, has been working with The Feldmans since 2014. Gavin purchased four properties for a total of seven lots, mostly in Old Town, working with Heather exclusively to both fi nd and sell the properties. “Heather has a real finger on the pulse of Park City.” declares Steinberg. “She’s a smart person, who’s also a hustler and nonstop worker, who educated me quickly. And our relationship didn’t end with signing the contracts.”

Heather told her client Gavin, “You need to be in Old Town now.’ He trusted me and got the land where we built some terrific homes. It was perfect timing and he has done very well.”

In addition to Heather’s real estate smarts and clairvoyance, Larry believes his company Altitude Design Build (ADB) has the best builder in town. Aft er the Feldmans flipped their spec house in the Sun Peak area in 2014, Larry went back to the builder, Lane Jacobson, who’s built for the likes of billionaire Ted Turner, and said, “We want to do this full time now and we want you to be our builder; just do the same four things that you just did with us: Don’t lie, don’t cheat, don’t steal and answer your phone.”

Heather adds, “Lane is the most down-to-earth good guy. He gave us wonderful options to save money on our first build without imposing his design. The fact he takes time and energy to save money for the people he’s building for is huge. Most builders don’t do this. And that makes all of us successful.”

And while ADB will work with any architect, their go-to guy is Bill Van Sickle of Van Sickle Design and Drafting, who has designed all of the personal and spec homes for the Feldmans.” There are some phenomenal architects in Park City, but I would easily put Bill on par with any of them,” proclaims Larry. “Bill understands that the curb appeal and floor plans have to be appealing to the majority of home buyers or it makes it that much tougher to sell an investment property. The bottom line is that Bill draws one helluva pretty home time aft er time and the fact that those homes sell quickly is proof of that.” Larry also believes their clients can relate to them: “I can go to someone building their first home and say, I was you a few years ago.

Truth is, 99% of the people we work with are like us where there is a budget involved. Not everyone can live in Th e Colony and spend whatever they want. That’s not the real world.”
But with Park City real estate skyrocketing, one wonders if it’s too late to build? “No, it’s an ideal time,” contends Larry, “Not only can you build with us for about the same or less than what you have to pay for a pre-existing house, you’ll get exactly what you want if you allow our team to help with the process. Plus, we don’t have to empty your bank account to build your dream home.” 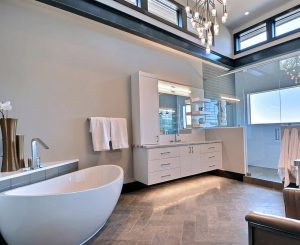 “Park City has changed but there are new pockets with tremendous potential,” adds Heather. “I’m always happy to have someone contact me to discuss some of the better options. We certainly can’t aff ord to do them all, so it’s a great feeling when we’re able to help others.”

Undoubtedly another driving factor of ADB’s success is that they are still building homes at cost +12% (meaning roughly $300 per square foot) in a day when a lot of others are charging upwards of $500 per square foot.

“There’s blood in the water and the sharks are circling and many of the contractors are taking advantage of this by charging more than it really costs to build,” Larry portends. “In our business model, we’re fair, competitive and do the right thing by our clients. We’re more concerned in making our clients happy than chasing the almighty dollar.”

ADB also doesn’t overcommit, focusing on only four or five homes per year. “Th e more you spread yourself thin, the easier it is to create gaps you can fall through and then the client becomes unhappy,” says Larry.

“In the end, we want to have the reputation as the good guys in town. And if we’re the dynamic duo—Heather’s Batman and I’m Robin. She’s way smarter than me,” says Larry, knowing who’s the boss in this household.

INDULGE IN THE POSSIBILITIES AROUND PARK CITY Park City is known for many things including skiing, snowboarding, breathtaking views, and the Sundance Film Festival. In...
Home + Mountain Life

BLENDING FORM WITH FUNCTION FOR THE HOMEOWNER - Park City Home Design The structural build of a house can be quite simple—a plot of land...
X