If TEDx and Burning Man had a lovechild, Summit Series might be it.

Part think tank, part inspirational networking festival, Summit Series is an annual conference where people exchange ideas rather than business cards. Where creativity is a commodity. Where CEOs and nonprofit leaders, innovators and authors, collaborate to solve problems both local and global.

It started with a group of dreamers, four twenty-somethings looking to make a positive impact. The four ˇ Elliott Bisnow, Je˜ Rosenthal, Brett Leve and Jeremy Schwartz created the Summit Series. At first, these invitation-only gatherings took place wherever the founders could make them happen. A cruise ship, a Tahoe ski resort, even the White House played host. But then, the founders considered something else: the power of permanence. 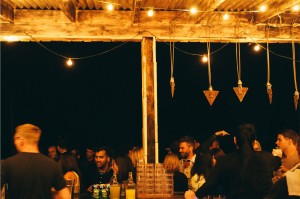 Greg Mauro, a venture capitalist who had been to a Summit Series event, reached out to the founders and told them about a hidden gem in the mountains. Near Eden, Utah, where he had been living seasonally, Powder Mountain was a secret spot that just happened to be the largest li° -accessible ski mountain in the U.S. And Greg knew it was the perfect location for Summit Series to call “home.”

I didn’t want to see my favorite mountain turn into yet another overdeveloped resort,” said Mauro. “I realized that by giving this community a home here, we could avoid that fate, and build the coolest little mountain town on earth.”

Fortuitously, Powder Mountain happened to be for sale, so the founders partnered with Mauro and crowd sourced a reported $40 million to buy the ski resort.

˝The skiing at Powder Mountain won’t change drastically — it will still be known for its old-school approach: duct tape keeping your pants together? You’ll fit right in. Powder Mountain promises to stay true to its roots: skiing, the way skiing was meant to be. But the resort’s owners have big plans for the resort’s new village, which sits atop three bowls at 8,400 feet.
their vision includes something of a futuristic, co-op type town: a horseshoe-shaped village that features a Main Street closed to vehicles, farm-to-table restaurants, environmentally-friendly hotels and pop-up boutiques. Also envisioned is an organic garden.

˝This environmental utopia sounds pretty good to a good number of people. Actors, athletes, and pop-culture cons have already purchased homesites around the village. ˝There are only 500 single-family lots, and in an effort to preserve the natural environment, homes built on these lots cannot exceed 4,500 square feet above ground.

It just reiterates the founders’ philosophy that bigger is only better when it comes to ideas.

Just a peak around town reveals a sizzling selection of summer fashion inspiration. This perfect summer shoe pairs with everything from maxi dresses and midi...
2016 Issues

Taking Your Troubles Outside By most accounts, two of the best ways to beat the blues— from seasonal depression to a bad day at work...
X