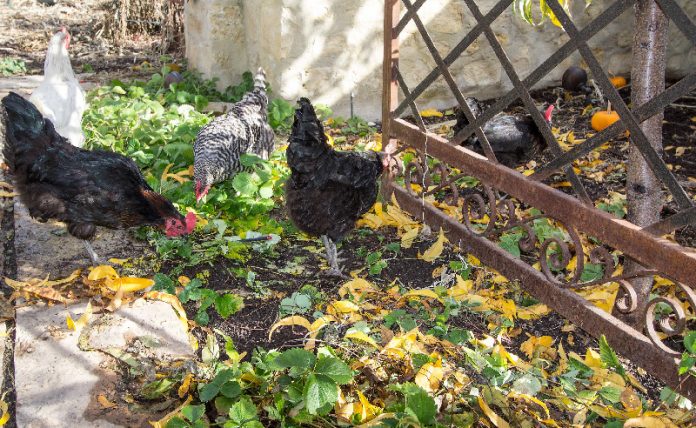 CHICKENS CLEAN UP GARDENS BY EATING LEAVES, WEEDS, AND GRASS CLIPPINGS, AS WELL AS EARWIGS, GRUBS, AND OTHER PROBLEM INSECTS. THEY ARE ALSO KNOWN FOR DEVOURING GARDEN PEAS, SO BE FOREWARNED.

Keeping backyard chickens has become wildly popular. Is it because chickens are a local source of fresh eggs or perhaps because it makes solid environmental sense to feed chickens vegetable scraps and to return their waste into the garden soil? Or is there something about chickens that brightens people’s lives?

It’s the time of year when the feed stores and farm suppliers have galvanized tubs of fluffy peepers. It’s tempting to just say yes and take two or three home, and there are plenty of reasons to justify becoming a backyard chicken keeper—just listen to other chicken owners. 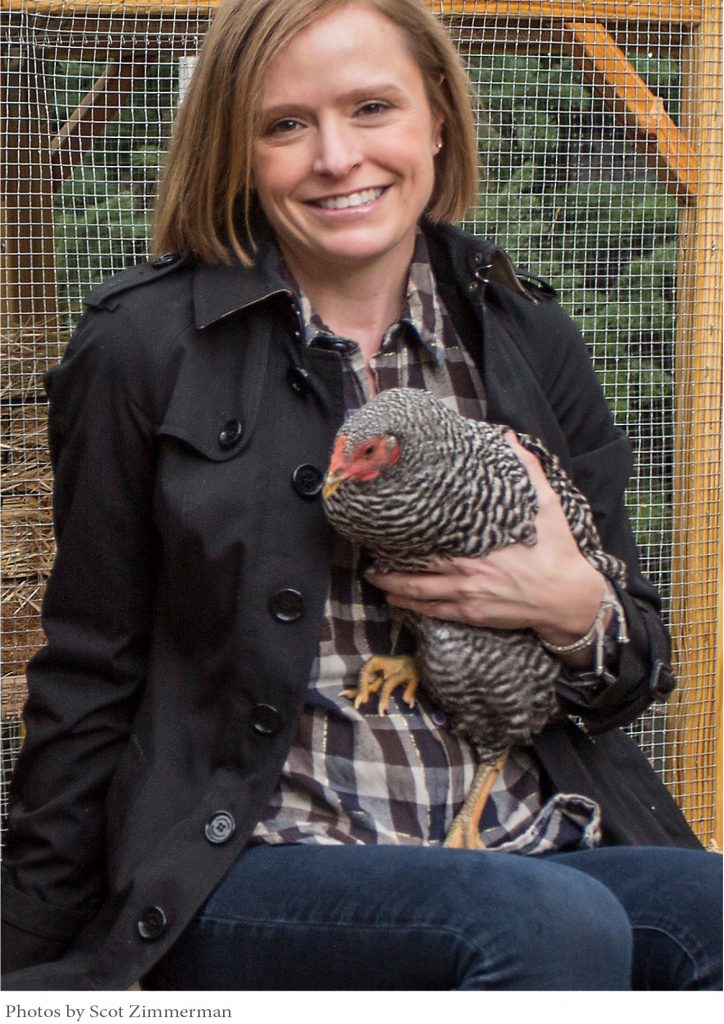 Interior designer Jenny Samuelson, principal designer with J Squared Interiors in Park City, keeps chickens at her home in White Pine Canyon. “Oh, how I love my chickens. Some might even say I’m obsessed. They provide the most delicious eggs ever, but what I love most is the daily dose of humor they bring to my life. Anyone who has witnessed five hens chasing after a hen with a long strand of left over spaghetti in her mouth will know what I’m talking about.”

JENNY SAMUELSON TAKES A MOMENT TO HOLD ONE OF HER BACKYARD CHICKENS. CHICKENS ARE KNOWN TO FALL ASLEEP DURING A CUDDLE.

Eggs and chickens attract predators. Protecting chickens and their eggs from other animals is especially important in the Park City area and Wasatch Back, where they are threatened by fox, skunks, weasels, raccoons, coyotes, hawks, and owls, in addition to cats and untrained dogs. Clever raccoons can even reach into windows and undo latches. 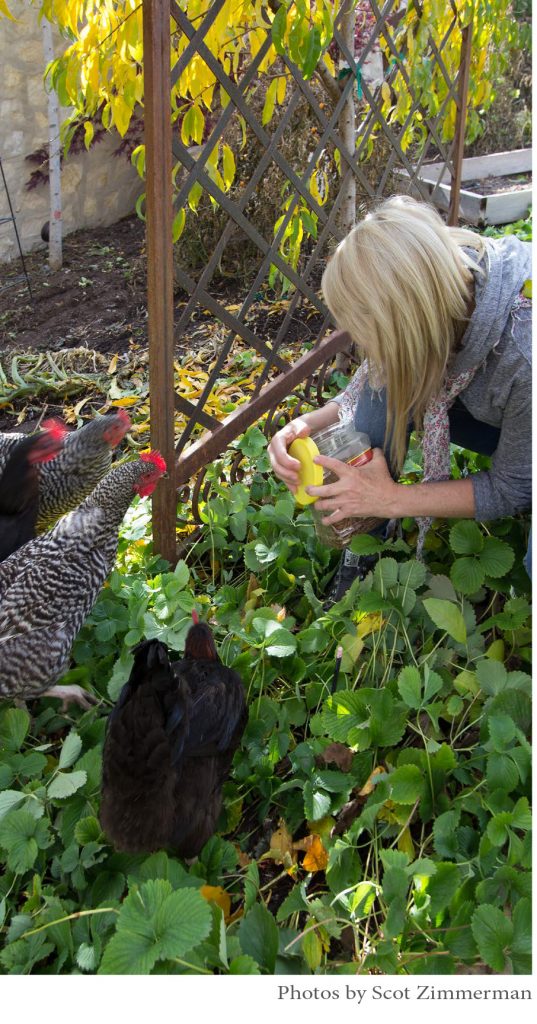 Experts advise checking local zoning and rules before starting with backyard chickens. Even if allowed, some ordinances may limit flock size, prohibit roosters, and set the distance a coop must be from the property line.

Also, breeds vary and the choices are immense. Th e American Poultry Association maintains a full list of breeds, and the organization My Pet Chicken has “Pick A Chicken,” a breed selector tool, on its website. Th e University of Minnesota Extension notes Rhode Island Reds and Wyandottes are popular choices for backyard flocks, as are Ameraucana for the green eggs they lay and Orpingtons for their cold weather tolerance.

It’s important to remember that chickens don’t always lay eggs. Most are five to seven months old before they lay, and egg production peaks at age two and tapers off and ends in a few years. Commercial producers slaughter non-producing chickens for meat, but this isn’t always a good option for backyard chicken farmers.

JENNY SAMUELSON’S DESIGNER TOUCH CAN BE SEEN IN HER CHICKEN HOUSE, WITH ALL THE BASICS TO KEEP THE CHICKENS HEALTHY AND SAFE FROM PREDATORS.

Versus other pets, chickens are considered low maintenance, but they do need a suitable coop with a chicken house and enough nesting boxes, a perch, and a ramp down to the run. They also need clean water, quality feed and healthcare. If allowed to forage during the day, they require someone to return them to the warmth and safety of their coop. Fortunately, there is expert advice available through Utah State University Cooperative Extension and other university extension services, as well as website resources like mypetchicken.com. For instance, chicks need special care for the fi rst eight weeks, because they can’t deal with low temperatures.

THIS FLOCK INCLUDES DIFFERENT BREEDS, AND FACTORS LIKE COLD TOLERANCE AND SOCIAL BEHAVIOR; THE APPEARANCE AND SIZE OF EGGS VARY BY BREED. 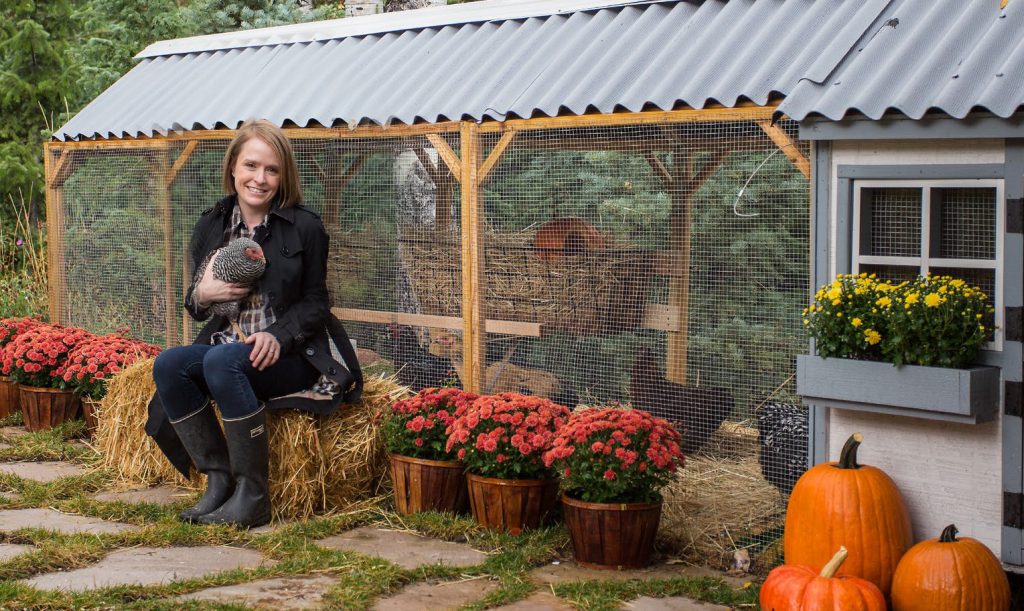 Gloria Grass has had her chickens, Petra and Esmeralda, for seven years. “They are still laying, but now only in the spring,” she says, describing how they peck on the back door when they want attention. Friend and Heber City neighbor, Barbara Brewer, adds, “Once you name them, you can’t eat them; they’re pets.” She mused that as much as she loves traveling, it’s hard to leave her chickens and she is hoping for someone to invent a chicken RV. “Th at way I can tow the girls on vacation.”

Jenny Samuelson understands, and she tells the story, “One of my hens, injured at the time, took a road trip with my two girls, two dogs, and me to the San Juan Islands last summer. It involved two hotel stays and I’ll admit that I got a few strange looks when I walked with her through the lobby.”

With some advanced preparation and research, one can be a successful backyard chicken wrangler, but be prepared. Th ey are charming, affectionate, and intelligent, and it’s easy to get attached.