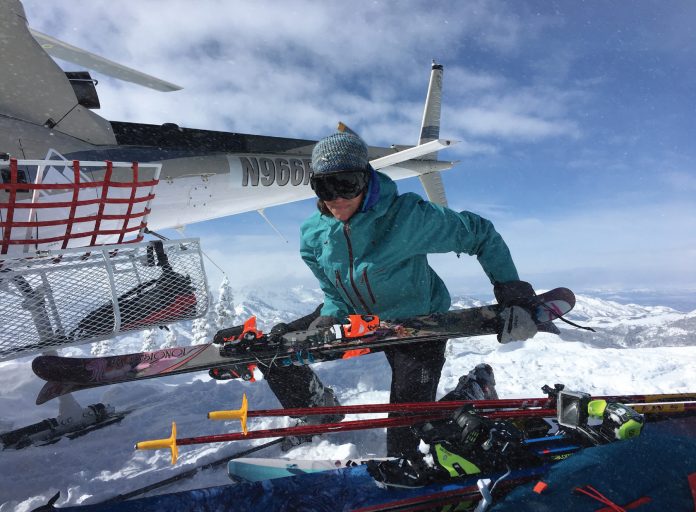 ONE UTAH WOMAN GETS A BIRD’S EYE VIEW OF THE BEST SKI GIG OUT THERE.

It’s a refrain heard at nearly every college commencement speech, “Find a job you love!”

Advice that is charming in theory, but not always practical. Mortgage loan officers, lawyers, or even magazine writers for that matter, might be good at what they do, but likely stop short of saying they truly love it. Few people can say they really love their jobs.

Kristen French is one of those few lucky people. As a guide for Diamond Peaks Heli Ski Adventures, Kristen spends her winter days flying from peak to peak, and then
flying down them as well.

“The idea of a ‘dream job’ is kind of idealistic, especially in the ski business,” noted Kristen, who worked as a ski patroller at a Park City area resort for over 17 years. “Skiing has long been my passion, but loving what you do doesn’t always keep the lights on.”
So after nearly two decades of throwing avalanche bombs, bracing twisted knees, and reuniting lost parents with their kids, Kristen began searching for something more. All she had to do was look up.

“I’ve known Craig Olsen for years,” she said, referring to the owner of Diamond Peaks Heli Ski Adventures and one of Utah’s premier backcountry experts. “He’s figured out a way to do what he loves, and I knew he would help me do the same.”

A phone call and cup of coffee later, Kristen found herself in what can only be described as the world’s best job interview. “He told me to come up and fly with them. He knew I had all the needed certifications, backcountry training and knowledge, but he wanted to see me to interact with his guests.”

So Kristen spent a winter shadowing Craig’s experienced guides, learning about the terrain, the helicopter and the white-glove service Diamond Peaks is known for providing.

“I knew, in the first five minutes of my first day of training, I wanted this job,” she explains. “Craig is one of the most respected people in the business. And his reputation for safety is second to none. That was important to me because when you guide a group in the backcountry, you are responsible for their lives.

So I didn’t want to work for someone who lets people ski in questionable conditions or is willing to take risks for the sake of profit.”

While Diamond Peaks’ stellar safety record was a deciding factor in her decision, helping a client check off a line on their lifelong bucket list wasn’t too far behind.

“There is something really special about being with a skier or boarder who has dreamed of heli-skiing one day. To be part of their dream coming true, to watch their face as they climb into a helicopter and later as they make turns in deep, untouched powder, I really can’t think of a better job. My dream job helps make someone else’s dream come true.” Indeed, a job to love.

Cinco de Mayo might be over but these two cantinas

Looking for a spring update to your home or wardro

Montage Deer Valley is an excellent way to make va

Hemped Park City has you covered for the best well

Teriyaki Grill has been offering the perfect solut

Healing and Recovery at -250 Degrees

It’s no secret that Park City is home to world-class athletes as well as weekend warriors. While you may not be a professional athlete,...
X