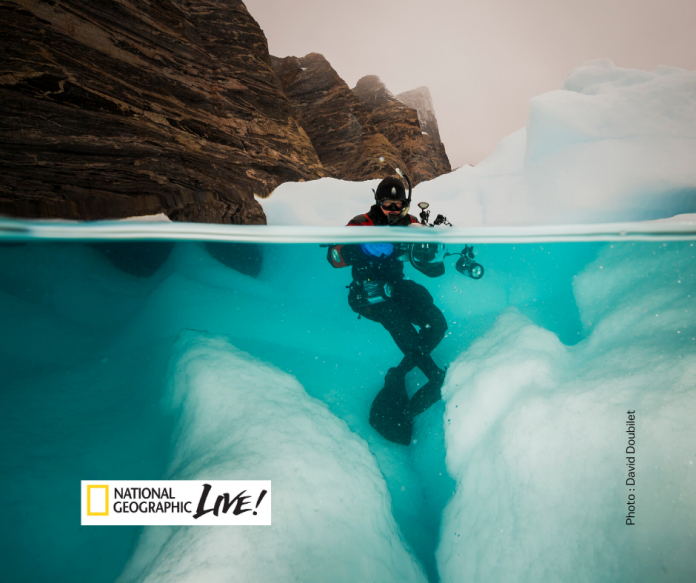 Tickets for “Coral Kingdoms and Empires of Ice” with David Doubilet and Jennifer Hayes are now on sale.

“We are excited to present National Geographic Live Coral Kingdoms and Emipires of Ice, with David Doubilet and Jennifer Hayes,” said PCI Executive Director, Teri Orr. “We are looking forward to them sharing their in-depth knowledge of the ocean, and their commitment to conservation, with our audience.”

Doubilet has a long and intimate vision into the sea. He began snorkeling at age eight at summer camp in the Adirondack and by age 12 he was making pictures underwater using a Brownie Hawkeye camera stuffed into a rubber bag. The bag filled with air, and it was like trying to submerge the Hindenburg. The pictures were barely recognizable. He has long since mastered the techniques of working with water and light to become one of the world’s most celebrated underwater photographers and a contributing photographer for National Geographic magazine, where he has published nearly 70 stories since his first assignment in 1971.

Doubilet has spent five decades under the surface in the far corners of the world from interior Africa, remote tropical coral reefs, rich temperate seas and recent projects in the northern and southern ice. His personal challenge is to create a visual voice for the world’s oceans and to connect people to the incredible beauty and silent devastation happening within the invisible world below.

Hayes is an aquatic biologist and photojournalist specializing in natural history and marine environments. She has authored and edited numerous articles on marine environments, and her images have appeared in books, advertising campaigns, and publications such as National Geographic, Sports Illustrated, Sport Diver, DIVE Magazine, Diver, People, Alert Diver, and Ocean Geographic. She is co-author / photographer for Face to Face with Sharks by National Geographic Books and an honorary editor for Ocean Geographic magazine.

Hayes and Doubilet collaborate as a photographic team above and below water on project development, story production, feature articles, and books. National Geographic assignments have taken them around the globe from Africa’s Okavango Delta, through tropical and temperate seas, and to the poles. Recent projects have found them in the remote corners of the Great Barrier Reef, under oil and gas rigs in the Gulf of Mexico, swimming among congregations of 500-pound goliath grouper, and submerged in the ice with harp seal mothers and pups.

For tickets and information, please call 435-655-3114 or visit parkcityinstitute.org.

Park City Institute is a non-profit organization, dedicated to bringing world-class performances and new ideas to the community. Since 1998, PCI has presented internationally renowned and cutting edge musicians, actors, authors, comedians, dancers, speakers, and film, at the George S. and Dolores Doré Eccles Center for the Performing Arts (a joint-use facility with the Park City School District). For 16 years, the organization has presented headliner summer concerts in Park City. PCI is dedicated to introducing young people to the arts through free student outreach workshops, shows and demonstrations. Entertaining, Educating, and Illuminating since 1998.

An Evening with Stephanie Land, author of MAID

An Evening with T Bone Burnett

The Utah Symphony Is Back!

Maintain Momentum — With Midseason Maintenance What a start to the season! And there’s plenty of more where that came from— now that we’re approaching...
Press