Like its beautiful turn-of-the- century building, Flanagan’s on Main has its roots in the early 1900s. While riding the Union Pacific Railroad across the country to gain support for his dream of caring for wayward and abused boys, Father E.J. Flanagan was accompanied by a young orphan named Charlie Kenworthy. They made annual fundraising stops right here in Park City’s Old Town. Years later, Kenworthy’s grandson, John, paid tribute to these great men and their mission by opening Flanagan’s on Main.

Many remember this moving story from the classic 1938 film starring Spencer Tracy, Boys Town. In the 1920s, Flanagan’s band of orphans performed to overflowing crowds on Main Street at the Federal Building bandstand. Kenworthy recalled his visits to Park City as one of the most successful and pleasant stops for the boys.

Understanding that the voice from a young orphan would be far more effective at loosening purse strings from a public suffering the economic turmoil of The Great Depression, the Irish immigrant priest trained Kenworthy in eloquence and oration. From state t6o state, train stop to train stop, young Charlie served as an example of Father Flanagan’s positive influence over troubled youth.
Young Charlie powerfully delivered the legendary priest’s message: “I come to you as a salesman—as I have something to sell—I am dealing in human hearts…love. The love of a homeless waif is for sale and it is my business to sell it to you. We do not want to develop into bad men, we want to be good citizens and assets to society…”

His appeal was winning—he never failed to bring grown men and women to tears. Here in Park City, the downtrodden and the hardened silver miners connected with the young homeless lad’s telling of his and his fellow orphan’s hardships.

The good people of Park City, with the profits from mining silver, responded generously to the orphans’ pleas and that money helped build what was to become Boys Town. Still one of the largest child and family-focused non- profit agencies around, Boy’sTown is dedicated to serving thousands of at-risk youth across the country each year.

Today, Flanagan’s on Main continues to serve its award- winning Irish fayre and traditional American favorites in their honor.

“Come and enjoy a cold pint where locals and visitor’s together celebrate the best of Park City’s unique spirit at Flanagan’s on Main.”

Your pets are counting on you to make good food ch

Visit Drafts Burger Bar, where they serve a large 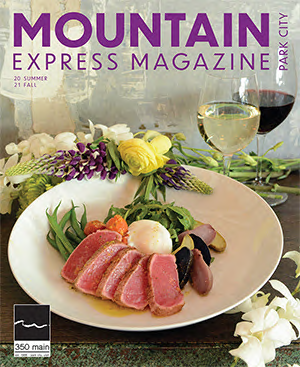 As one of the most influential nature and wildlife photographers today, Thomas Mangelsen has led the field with his passion for photography, as well...
2014 Issues

Let it go.   It’s an apt refrain, which we’ll happily borrow from Disney’s pint-sized pop culture and lay down as a challenge to all: Pause....
X