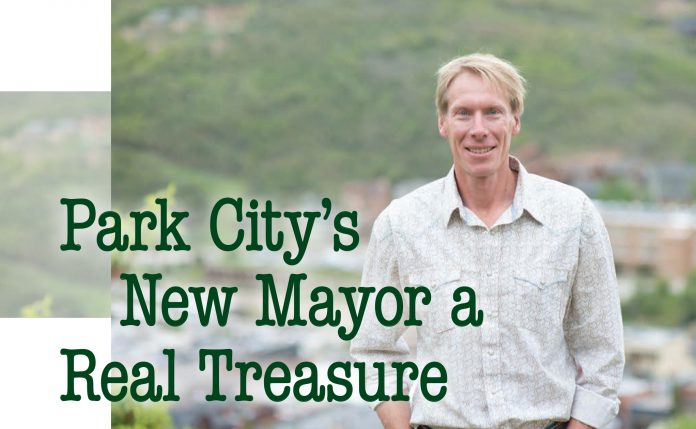 From Treasure Mountain Inn to Treasure Hill, Andy Beerman knows what it takes to lead.

When he moved to Park City in 1991, Andy Beerman needed a few things to settle in—a job, a place to live and an umbrella.

“I moved here in April, at the start of a very wet mud season,” Andy explained. “My first day as a Parkite, I went to what was then the Morning Ray and mingled with the local crowd over breakfast. Right away I felt a connection to this town. Even on a dreary, wet morning, I knew I’d found my home.”

Andy did the ski bum thing for a few years, then took a job managing the Treasure Mountain Inn on Main Street, where he fell in love with the boss’s daughter, Th ea. Eventually Andy and Thea married, becoming partners in both business and life.

His transition into politics would come much later, but a seed was planted in those early days managing Treasure Mountain Inn; it was his job to get all the condo owners to come to a consensus aft er decades of disagreement.

“Right away I felt a connection to this town. Even on a dreary, wet morning, I knew I’d found my home.”

“Being the HOA chairman was really my first taste of politics,” he said. “And the first time I realized you will never make everyone happy. But as long as you’re doing what is right, you can at least make progress.”

Andy began to understand the health of his business was directly linked to the health of his community, and quickly became more invested in Park City. He was appointed president of the
Historic Park City Alliance, where he advocated for local business owners. Because of this role, he became a regular at city council meetings, eventually launching a successful run in 2011. In
the middle of his second term, Andy decided to run for mayor, building his platform on a number of environmental initiatives. It wasn’t too much of a leap, considering that years prior he and
ea made Treasure Mountain Inn the first eco-friendly hotel in Utah, and one of the first in the country to use 100% renewable energy.

Last year, Andy and Thea sold Treasure Mountain Inn. It was prior to the election, but Andy was hopeful he’d have a new job by the new year. Voters granted him the opportunity, and Andy was sworn in as Park City’s mayor on January 3, 2018. In the half year he’s held the seat, he’s been a part of a number of exciting changes. Arguably the biggest being city hall’s agreement to acquire the Treasure Hill area in a $64 million deal, pending a voter approved bond this November. If approved, it will be the most expensive conservation purchase in the history of city hall’s lauded open space program.

“I was thrilled to see a full buyout option on the table,” Andy noted. “Just a few months ago, we were looking at the very real possibility of changing the Park City skyline forever with an enormous modern development looming over historic Main Street. Now residents have an option to vote for the vista they want.”

The Treasure Hill vote this November will be a fitting one-year election anniversary for Andy, who has always campaigned for more park, less city.

BLENDING FORM WITH FUNCTION FOR THE HOMEOWNER - Park City Home Design The structural build of a house can be quite simple—a plot of land...
Home + Mountain Life

INDULGE IN THE POSSIBILITIES AROUND PARK CITY Park City is known for many things including skiing, snowboarding, breathtaking views, and the Sundance Film Festival. In...
X