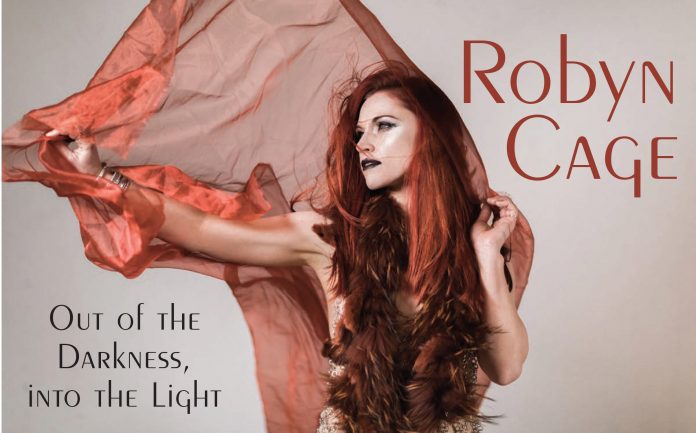 Born in the Utah desert, Robyn went on to study at the Boston Conservatory and became an accomplished actress in New York City, where her performances earned praise from the New York Times and Variety. Robyn’s debut album, Born in the Desert, won the Utah Music Award for Best Alternative, was named one of the 35 Top Albums of 2015 by I’m Music Magazine and topped the list of 25 Best New Music Critiques of 2015 by Music Connection Magazine.

The flame-haired songstress creates dark and dreamy alternative/pop tones, earning her favorable comparisons to Adele, Lana Del Rey and Florence + The Machine. Her artistry, however, is singular. Robyn’s pristine vocals shift deftly from smoldering low tones skyward to soaring high notes, and her poetic and storytelling lyrics transport listeners to another realm as experienced when listening to her new, full-length album.

Slow the Devil, released on February 16, 2018, is a collection of dreams, demons, duality, darkness vs. light, and unity vs. division. Blending layers of electronic and organic instrumentation from Orem-based producer Caleb Loveless, the upcoming album is a journey out of the darkness and back into the light. Th e album is available on iTunes, Amazon, Google, Spotify and more.

On a cold and snowy February evening, an intimate crowd eagerly bustled into Park City’s premier nightlife venue, Downstairs, hoping to warm their souls with the sultry, captivating sounds of Robyn Cage. As Robyn’s band set the tone for the evening with their well-composed, light-hearted opening set, the fans and media alike began buzzing with energy. Robyn chose to open the evening with “Dark Day,” a short but peaceful song that transitions into one of my personal favorites from the new album, “Fallout,” a beautiful masterpiece with dark undertones. As the evening continued, Robyn introduced various tracks off Slow the Devil and told the stories behind them, creating an even more intimate vibe. The set did include one cover, Jeff erson Airplane’s “White Rabbit.” Robyn’s pitch perfect voice brought it back to life and the crowd responded enthusiastically to her flawless version of the timeless classic.

As the set came to an end, Robyn expressed her gratitude to everyone that had attended and supported her throughout her career. The night was a success on many levels. First, it was an amazing show by a brilliant singer/songwriter. Next, it was a successful beginning for a wonderful album. Lastly, it was a celebration of a local artist whose success will soon surpass the heights of the mountains surrounding her.

ALBUM REVIEW
The opening track on Slow the Devil is “Dark Day.” A very peaceful track that sets the mood for what is to follow. Slow the Devil has a mix of tracks that combine Robyn’s mesmerizing voice with some intense subject matter, making the album intriguing yet ominous. I found Slow the Devil to be a great album from start to finish. I enjoyed the fl ow of beats and tunes and listened to the album from beginning to end in one sitting; it was truly a passionate project.

MADE IN PARK CITY SHOWCASES THEIR LOCAL JEWELRY DESIGNERS Winter is the perfect time to brighten up your wardrobe with a piece of jewelry. Fortunately...
X