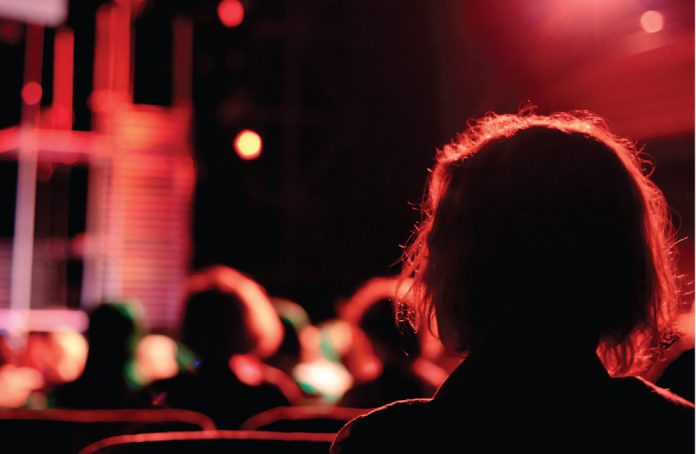 Park City is well known for its famous slopes, historic Main Street, and exquisite dining options but what can’t be missed is this towns are our love of the arts and entertainment. Home to a variety of venues everyone is guaranteed an opportunity to enjoy amazing speakers, films, plays and musical performances throughout the year.

T e Egyptian Theatre has been a landmark on Main Street for nearly a century. It was the original home of the US Film and Video Festival, which later becoming known as the Sundance Film Festival. Construction began in 1922 and its recognizable name and décor was inspired by the recent uncovering of King Tut’s tomb. Today, Th e Egyptian Theatre hosts an assortment of theatre, comedy, vocalists, and community events.

Opened in 1998, the Park City Institute at the Eccles Center for the Performing Arts is dedicated to bringing world-class performances to Park City. Now in their 20th season, the Park City Institute continues to present productions from around the globe right here in town. In addition, distinguished performers can be found in local classrooms to inspire our students and teachers. The Eccles Center also supports the community by subsidizing tickets for senior citizens, students, and first responders.

While visitors and locals enjoy the abundance of guest performances year-round, eager residents can now enjoy seeing their friends, family and neighbors perform on a regular basis. Based at the Prospector Square Theatre, the Park City Community Th eater is off ering talented Park City locals, including high school students, the opportunity to perform and entertain in a variety of plays and musicals.