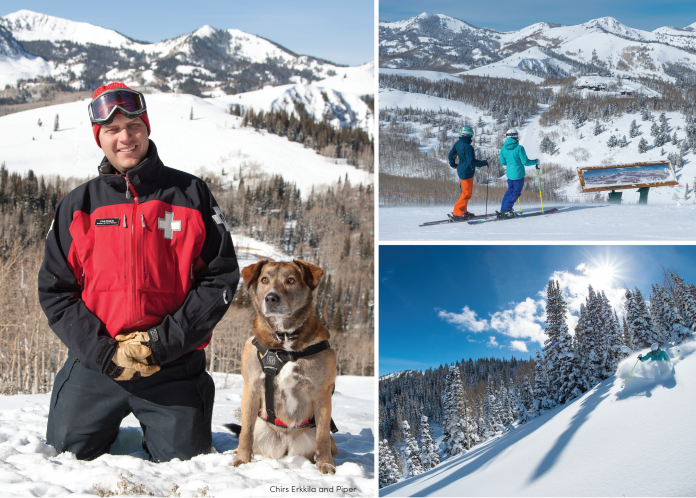 As Deer Valley’s Ski Patrol Manager, Chris Erkkila states, “To be a ski patroller takes a certain type of person. Our team members are all Type A personalities that love adventure and adrenaline.”

To many, being a ski patroller sounds like a dream; you’re fi rst on the mountain and get to spend a fair amount of time riding the trails. However, what most people forget, is that it’s a life or death job. As a ski patroller, people’s lives are literally in your hands. With one of the most elite ski patrol teams right in our backyard, we wanted to learn more about the person behind the team. Chris Erkkila took a moment from his busy day to answer a few questions and to let us see the man behind the ski mask.

What is your official title?
In the winter my title is Ski Patrol Manager and it’s Mountain Biking Manager in the summer.

How long have you been part of the Ski Patrol?
This is my 20th winter at Deer Valley. Overall, I have been a ski patroller for 25 years.

Do you have a mentor or hero that has influenced you?
Multiple people have influenced me over the years. However, at my first paid job as a ski patroller, my patrol director took me under his wing and taught me the ropes. He’s the person that told me he was confident that I would go somewhere in the ski industry. He was also the best all around ski patroller I have ever worked with.

Have you had any entertaining situations with a famous or influential visitor?
I did have an interesting encounter with a high profile politician. His staff comes out every spring for a conference and one of their favorite things to do is an early morning group hike. I got up one morning to facilitate the trek and the politician was there with a modest group of people. I commented that it was nice to go out with a small group and he stated that the day before the hike was three times as large. I wondered why there would be such a size difference from one day to the next and he surmised that it could have something to do with the fact that a supermodel had joined the hike the day before. I said, “Well, you can run for President of the United States but that doesn’t hold a candle to a supermodel.” We both had a good laugh about that.

How old were you when you started skiing and what was your “home” mountain?
I come from a “ski family.” Both my parents were addicted to skiing and they started me and my brothers very young. We were three and four when we first hit the mountain. Luckily, we lived close to a mom & pop ski resort near Santa Fe. The resort is called Pajarito, it means Little Bird, and it’s the perfect place to learn to ski. I have two brothers and we all love skiing. We were all volunteer ski patrollers when we were younger. I was lucky enough to make a career out of the passion, and I think both of my brothers are jealous! Of course, when they visit me, they get free ski passes and a place to stay, so it’s a pretty good gig for them too.

What equipment are you skiing on this season?
For the last few seasons I have gone between powder skis to carving skis. I’ve finally ended up in the middle and have settled on a pair of all mountain Rossignols.

What’s your favorite DV ski run?
That is a really tough question and I guess it depends on the conditions. If it’s a groomer day, I take a first run on Stein’s Way. It has such gorgeous views. For those powder days, anything off Mayflower!

What’s your favorite way to wind down after a long day at work?
I have three children ages 5, 2 ½ and 8 months so I wouldn’t say I wind down aft er work. Th at being said when I walk through the door and see the excitement of my little ones, it’s totally worth everything. Having children is so much fun! I’m trying to cherish every moment because you know what they say: the days go by slow, but the years go by fast.

What’s your favorite restaurant in Park City?
When we get time, my wife and I love a great sushi dinner. Our favorite is probably Oishi Sushi at the bottom of Main Street.

How do you spend your vacations?
My wife and I like to plan at least one trip per off -season, spring and fall. We like to do road trips and have an R.V. we pull behind our truck. For the past few years we’ve gone north: Yellowstone, Idaho etc. So to add some variety, for this fall we plan on driving south to the Four Corners region.

Welcome Home – The Residences at the St. Regis Deer Valley