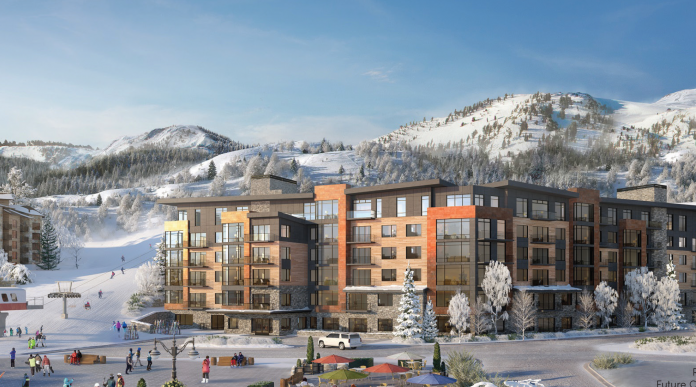 The Canyons has undergone many incarnations since its humble beginnings when the ski resort opened as Park West back in 1968. Changes in ownership over the years led to a series of different names and visions, but when Vail Resorts took over the operation of the ski resort, investing $50 million and connecting Canyons and Park City Mountain into one mega resort with 7,300 acres of skiable terrain, a new era was born. This bold move motivated leading developers such as Replay Resorts and Columbus Paciﬁ c to invest in this area, which has ﬁ ve-million-square feet of developable space. And now the master plan for Canyons Village at Park City Mountain to become a modern, international alpine destination is unfolding at a rapid and luxurious rate.

Replay Resorts, drawing on their expertise, having helped create renowned ski villages in Whistler, BC, Copper Mountain, Colorado and Les Arcs in France, among many others, assisted in the creation of a new master plan that was approved in 2017. This updated master plan is focused on a four season, self-sustaining, walkable village for the next generation of outdoor enthusiasts. “The plan creates a new and friendlier pedestrian environment with shops, restaurants and public spaces. It will be a vibrant village in all seasons,” explains Gary Raymond, Managing Director of Replay Resorts. Th eir aim, in conjunction with TCFC Propco, LP, the master developer of Canyons Village, is to amplify the area’s alpine character and create an urban environment in a mountain setting through connectivity, walkability and special experiences. “A village is really about people,” adds Raymond. “It’s about creating places that people enjoy being in. We plan the plazas, the open walkways—and the gathering spots—and then we put up buildings around that.”

“We are big believers in the future growth of the Canyons Village as the primary entry point to Park City Mountain. What’s nice about the Canyons Village is that it’s all part of the master plan, so there’s a lot of clarity as to what can be built there. From our perspective as developer it’s been a really great place to build.”

At present, Canyons Village is approximately 29% developed. According to Shirken, the preliminary part of the new vision will be completed for winter of 2021 with the delivery of Pendry Residences Park City, managed by Montage International. Shirken believes that this upscale property will truly elevate Canyons Village and become the social hub, as the resort will have the only rooftop bar in the area, as well 40,000-square feet of ground floor retail and restaurant space, two levels of parking and five dining concepts, including an inspired Japanese-American steakhouse, along with authentic Japanese sushi and ramen. “With our strategic location, superior amenities and unparalleled experiences, Pendry Park City is perfectly positioned to propel Canyons Village into its next generation. This will become the first stage of the village. The remainder of the resort core will be built out over the next five to seven years,” adds Shirken.

Another key player is Canyons Village Management Association (CVMA), which oversees the development and progression of the Canyons Village Specially Planned Area and functions as a Master Association. One of the crucial projects generated by CVMA is employee housing, and this essential initiative will also be built by Columbus Pacific. “It’s very hard to run any kind of project without an affordable place for employees to live, so we are building an 1,100-bed employee housing project, which will start construction in spring of 2020. Th is will make it easier for both the resorts and hotels to hire and house employees,” says Shirken.

In addition to populating the village with luxe hotels, restaurants, cafés, bars and shopping, there’s also a move toward more robust entertainment and events. CVMA is focused on a dynamic, four-season events calendar of world-class experiences for both local and destination visitors. CVMA leads summer programming for events like the Park City Wine Festival, July 3rd celebration with fireworks and ongoing concert series. New exciting events were added to the 2019 line-up such as the start and finish of the spectacular Tour of Utah bike race and Oktoberfest, a multifaceted suds-centric event with a Bavarian beer hall and market, and contests like keg bowling, stein lift ing and bratwurst eating. CVMA partners with Park City Mountain on these summer events, as well as key winter events such as 2019 FIS World Championships, fireworks and live music.

“The programming will continue to expand in order to create interest from the local community,” chimes Shirken, who claims that the locals are reacting positively to the transformation of Canyons Village. “Everybody thinks there is room for more interesting retail and restaurants and more variety, and so far the response has been very positive. In fact, we’ve had a number of locals buy units in our Pendry project. I think they see it as a good place to start and end their ski day. Just for themselves.”

So is it still a good time to invest in Canyons Village at Park City Mountain? Shirken certainly thinks so. “If you look at the relative value of Park City compared to other major ski destinations such as Vail and Aspen, it is still trading at a significant discount to those markets with much better access. The new airport is opening soon and the number of flights coming into Park City on a daily basis make it much more accessible than many other major ski destinations in the country. The idea is to create a true ski village. It will be along the lines of a smaller version of Whistler,” explains Shirken. “It will be a destination that guests don’t have to leave.”

Living on the Ridge – The Ridge Park City

End of An Era – Annette Velarde Ready for Her Next...

As a result of my years in the Character Department at Walt Disney World, everyone I meet is immediately categorized by character, depending on...

Worry Less So You Can Live More

It’s time to welcome summer by transforming your home from warm and cozy to light and airy. From indoor entertaining to outdoor recreating, we’ve...
X