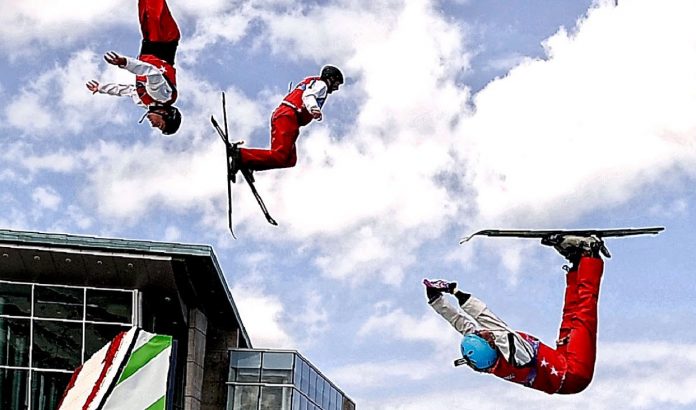 Soaring even higher at: the Spence Eccles Olympic FREESTYLE Pool

Last summer, athletes took their first jumps into the amazing new Spence Eccles Olympic Freestyle Pool at the Utah Olympic Park (UOP). Aft er an incredible sampling of what can be done with the new facilities, we can’t wait to see what they have in store this year.

There is truly no other facility like this in the world, providing Park City athletes with the best of training opportunities. Th e$3 million dollar project took only nine months to complete, thanks to the incredible efforts of the U.S. Ski and Snowboard Association, the Utah Olympic Legacy Foundation (UOLF) and U.S. Ski Team alum and philanthropist Spencer F. Eccles’ $1 million challenge grant.
The new game-changing freestyle pool was expanded from 750,000 to just over a million gallons to accommodate the new jumps, while its unique bubble system allows for testing new tricks in a safe environment. Th e pool now has seven sport-specific ramps for aerials, moguls, freeskiing, snowboarding and big air.

“With over 200 donors, making this project a reality was truly a team effort,” said UOLF President and CEO Colin Hilton. “Th is renovation really exemplifies the community support for winter athletics and our organization’s mission to ensure long-term viability and relevance of Utah’s Olympic Legacy efforts.”

The UOLF’s original training pool was built in 1992 and soon became one of the most heavily-used training facilities of the Foundation’s venues. Olympic and World Championship medalists have trained at the pool, and it has served as a development base for thousands of young athletes.

“The renovation allows us to bring all of the freestyle, freeskiing and snowboarding elements into the training center. What we’ve put in place is really unique worldwide. It will be an asset for athletes around the country for years to come,” said Luke Bodensteiner, Executive Vice President of the U.S. Ski and Snowboard Association (USSA).

USAA Hall of Fame inductee and 1998 Olympian Kris “Fuzz” Feddersen, along with fellow teammate and inductee Trace Worthington, have been producing the Flying Ace
All-Stars shows since 1998. Feddersen explains, “Getting a chance to see these athletes perform and meet them aft er a show is very unique. You don’t have a chance to meet future Olympians and get a signed poster on a regular basis at any venue in the world.”

World Cup Champions Ashley Caldwell, Mac Bohonnon, and Kiley McKinnon are just a few of the spectacular athletes you can see at the shows this summer.

Shows are every Saturday and Sunday at 1 pm, June 26 through September 4 at Utah Olympic Park. Individual show tickets are $12 for adults and $7 for seniors (65+) and kids (3-12). Also new this summer, the Flying Ace All-Stars Freestyle Shows will be included in the UOP Gold Pass, allowing guests to experience all of the adventure activities at the Park.

Lessons in Wine from a Master Sommelier

By Laura Jackson Park City never fails to amaze with its great wealth of resources, and wine expertise is no exception. Master Sommelier Ron Mumford...
2016 Issues