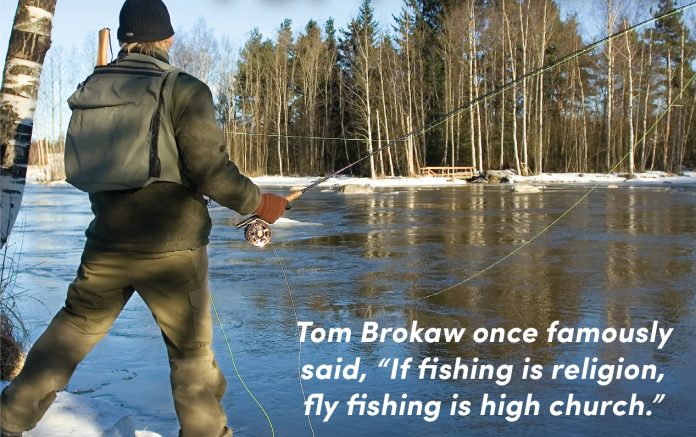 In Utah, one can attend that “high church” seven days a week, 365 days a year. A lot of people come from other states where they’re used to a fishing season that may end in December and not reopen until April of the next year. Here, there’s quality fly fishing all year long.

In winter, fly fishing is a relaxing, fun adventure that offers a chance to escape the hustle and bustle of the ski scene, put away cell phones for a few hours and spend time with family or friends in the peace of the great outdoors. You may see ducks flying, eagles soaring, moose roaming and fox scurrying. And hopefully the fish are biting! The rivers are generally less crowded, too, which can make it even more special.

It’s been said there’s no such thing as a bad day, there’s only bad gear. It’s important to be aware of the weather and to wear layers in order to accommodate swings in temperature, wind, and snow. Being prepared for cold weather with things like good waders, gloves, and a hat allows you to stay outside and get the most out of the trip.

But what about the fish? According to Chad Jacques, owner of Trout Bum 2, a fantastic fly fishing shop on S.R. 224, “Winter is the time of year you’re either going to be fishing a lot of small flies like midges or really big flies for streamer fishing. It’s predominantly brown trout, and there are some rainbow trout, too.”

If you’re not sure what to bring, Jacques recommends stopping by the shop, even if you’re not planning to hire a guide, so that you can grab whatever knick-knacks or gear you might need. Th e experienced staff will also know the latest information on where the hot spots are, which can change from season to season and even mid-season. Said Jacques, “The fishing starts to get really good in mid-January, February and March. Th at’s when the hatches tend to be stronger and you find more fish on the surface, rising to adult bids, which puts dry fishing into the game, which is really fun.”