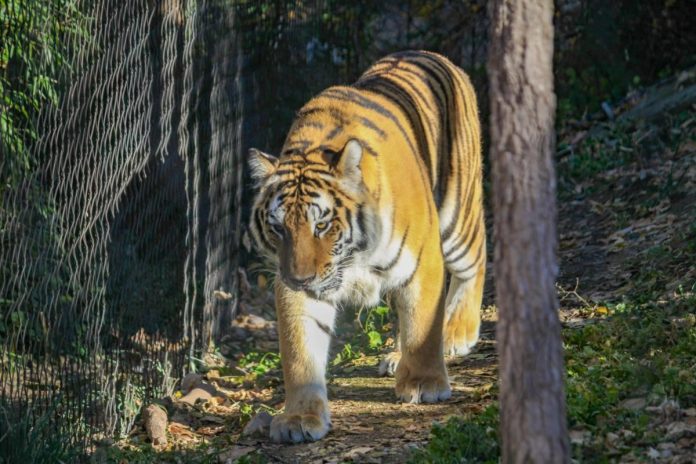 Sasha may eventually be recommended to breed with Nikolai (an 11-year-old male Amur tiger and current resident at Utah’s Hogle Zoo) when she matures. Utah’s Hogle Zoo animal care teams and management will continue to work closely with organizations following a Species Survival Program (SSP) and breeding recommendation by the Association of Zoos and Aquariums (AZA), which promotes healthy, genetically diverse populations in accredited zoos.

While Sasha continues to get to know her new animal care team at Utah’s Hogle Zoo, guests are welcome to come meet Sasha where she can be seen at her new exhibit in Asian Highlands. Considered solitary animals, and to best mimic their natural surroundings, Sasha has a dedicated habitat next to Nikolai.

Threatened by poaching and habitat loss by deforestation, the population of Amur tigers are dwindling. There are only approximately 500 Amur tigers left in the wild, making them an endangered species. Found in Russia Far East with a small number ranging in China and possibly North Korea, Amur tigers are considered one of the largest cats in the world. With an average weight of 240-290 for female Amur tigers, and 450 for males, sexual maturity typically peaks around four years of age. Gestation period tends to range from 3-3.5 months with litters of an average size of two to four cubs. In the wild, Amur tigers have a life expectancy of 10-15 years. Under specialized human care, Amur tigers can live up to approximately 20 years of age.

Meet New Artists at Midway Art Association Gallery For the months of February and March, seven new artists will join the Gallery sponsored by the...

Visit West Wendover, It’s an easy scenic ride just west of Salt Lake City For those of you looking for a fun-filled weekend, may we...
X