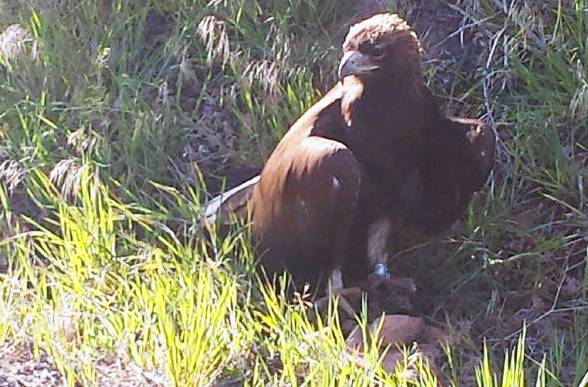 Everyone needs a hero, human and animal alike. While humans can make an audible cry for help, seeking out heroes when your wings slice silently through the sky isn’t always as easy. That’s where the Great Basin Wildlife Rescue comes in. Rehabilitating approximately 200 raptors a year — they’re birds of prey for those conjuring up images of Jurassic Park — and releasing about 85%, Great Basin Wildlife seeks to repair some of the damage caused largely by humans.

For those unable to be released back to the wild, ambassador birds are used to provide educational outreach activities including private releases and up-close-and-personal experiences with birds such as: golden eagles, barn owls, goshawks, red-tailed hawks and other small owl species. And talk about heroes — there are no paid staﬀ at Great Basin. All of the people working there are volunteers, ensuring that all funds go directly toward caring for the wildlife.

Assisting those wings that have been wounded, Great Basin Wildlife reaches out to disabled combat veterans, allowing them to experience the art of falconry, through their Wings of Valor program. Returning veterans participate with Great Basin Wildlife and in the process become skilled masters of the powerful raptor. To become a soldier is to master subtlety and skill including endless hours of devotion to our country. Th e discipline and the skills developed by these veterans easily translates to the skills necessary to be a successful falconer.

Great Basin Wildlife doesn’t just have their head in the clouds. Along with birds of prey, Great Basin Wildlife also rehabilitates animals such as black bear cubs and bobcats like Pumpkin, one of their latest bobcats to be rehabbed and released to the wild. Orphaned, abandoned and injured, no animal is denied the healing hands of these heroes.

Education is paramount to ensuring these animals are rescued, rehabbed and released (when possible); so, Great Basin Wildlife makes sure
their education programs are aﬀ ordable for groups ranging from camps and homeschool groups, to private groups and scouts. Flying as high as the eagles and together with the bears, Great Basin Wildlife helps to keep our wildlife wild and safe.

Great Basin Wildlife should not be missed by anyone curious about our animal neighbors or wanting to get up close and personal with their favorite raptor. To learn more, plan your event or to make a greatly needed donation, visit their website at greatbasinwildlife.net

Majesty in the Mountains – Elk Migration in Park City, UT

MADE IN PARK CITY SHOWCASES THEIR LOCAL JEWELRY DESIGNERS Winter is the perfect time to brighten up your wardrobe with a piece of jewelry. Fortunately...
Shopping + Services

WHAT TO DO WHILE YOU WAIT AT THE SALT LAKE CITY AIRPORT We all know the feeling—you get to the airport way too early for...
X