It’s a common expression, “home sweet home.” But when Jeanette Brooks says it, it’s more of a declaration. Her house is indeed pretty sweet — both literally and figuratively. 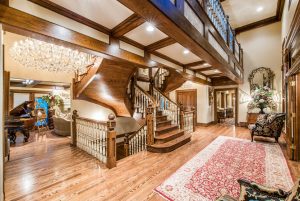 For starters, her River View Ranch property in Woodland, Utah boasts over 16,000 square feet on a sprawling 270-acre estate backing to the Upper Provo River. Nine themed bedrooms, hand-carved woodwork, a 25-stall horse barn and riding arena, private blue-ribbon waters and a dance hall are just the beginning of the amenities. 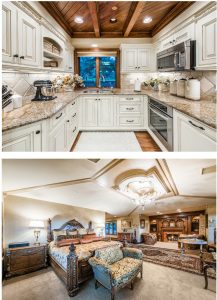 Every room is filled with museum-quality artifacts, many previously belonging to the Queen of England. Th ere’s a dining table the Roosevelts once gathered around. Pubs handcraft ed in the 1700s have been imported from Scotland and Ireland. A hand-painted, dome-shaped ceiling and stained glass panels allow for divine reflection. And in case things in the outside world aren’t so calm, there’s a bomb-proof safe room with an escape tunnel and supplies to survive entirely off the grid for up to one year.

But these features are just the icing on the cookie — the home’s history is pretty scrumptious too. It was built and previously owned by Debbie Fields, who baked her first cookie and launched her Mrs. Fields empire from the kitchen. When her company filed for bankruptcy, the property went into foreclosure and soon fell into a state of disrepair.

“It was a dilapidated mess when I bought it,” Jeanette recalled. “The portico had detached from the house. Windows were broken or missing. But the bones were good and the property was jaw-dropping. I knew it was worth preserving and decided to renovate it. It looked hopeless, but I was up for the challenge.” 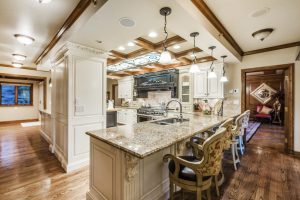 Luckily, Jeanette had some experience making the seemingly impossible happen — she created the world’s first good-for-you chocolate, Xoçai Healthy Chocolate, and later sold it worldwide through her network marketing company MXI Corp. “If I could make chocolate healthy, I knew I could make this house majestic again.”

It took nearly a year for Jeanette’s vision to become reality. Much of her inspiration came from European manors, which had always delighted her. “If you combined a world-class museum with a European manor and threw in some spurs and a cowboy hat, you’d have River View Ranch,” noted Janalee Jacobsen, the estate’s listing agent. “It really is a one-of-a-kind legacy property.”

Jeanette admits it’s hard to sell such a special place. “We’ve created so many family memories here. River View Ranch will always be a part of me. But we’re ready to downsize a little and let someone else have the opportunity to be part of the home’s next chapter.”

And in case you’re wondering, potential buyers don’t have to own a dessert business to get a piece of the pie. They just need a sweet $18 million. 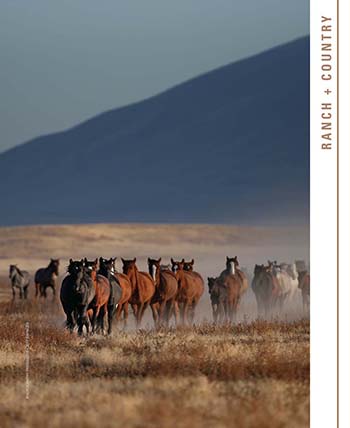 FIND YOUR ESCAPE AT RED LEDGES Years ago, Joyce Jordan, rodeo queen, and her husband Tony Burns, settled in the Heber Valley of Utah and,...

Utah’s “champagne powder” and award-winning ski resorts are often what brings so many to Park City in the ﬁrst place, and Promontory Club is...
Park City's Best Luxury Living

Evolving and expanding at a meteoric rate, Park City has become one of the most popular alpine destinations in the country. Coupled with this...
X