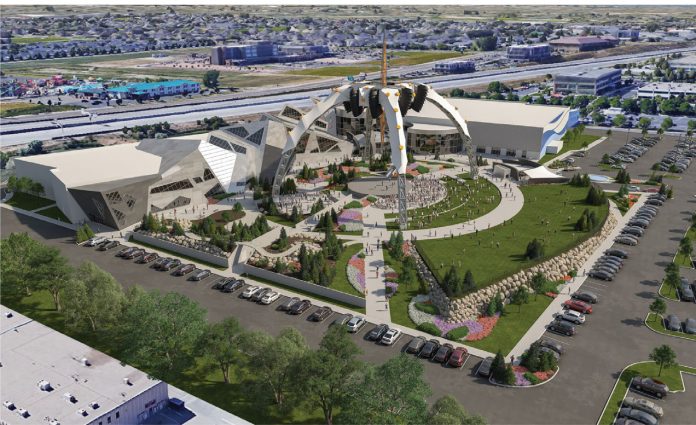 Transport yourself to another world at the Loveland Living Planet Aquarium. New this year is a virtual reality-based interactive exhibit, five-story conservation center; 7,000-seat outdoor theater and, The Claw, a piece of rock history from the band U2.

The Claw made its first appearance in Utah in Rice Eccles Stadium on May 24, 2011. Now the 190-ton structure is moving to the Loveland Living Planet in Draper, Utah. Adding to the critical mass of the space, The Claw will be a draw for locals and tourists while providing an entirely unique experience.

The Claw will be home to concerts and provide space for outdoor animal habitats, imaginative play areas and more.

Part of U2’s 360 tour, the highest-grossing concert tour of all time, The Claw was seen by more than seven million people in 68 stadiums around the world. U2 had three structures built for the tour; this will be the only one permanently installed in the United States.
Rolling Stone magazine reported Brent Andersen, founder and CEO of Loveland Living Planet Aquarium first saw the structure at U2’s concert in Barcelona, Spain in June 2009; he was awed by it. Th e mission for the aquarium is to help visitors understand and respect Earth’s ecosystems. Andersen believes this will help.

Michelle Forrest, a Salt Lake City native, who has seen U2 live 20 times, first saw The Claw in Dublin, Ireland. “It was like looking into the inner workings of a spaceship. Th ere were men stationed at the top of each leg warning us this magnificent structure was about to take us to new levels. Now, I’ll be able to show my daughter, Sofia, what I experienced.”

Coral Reef's, Dense Jungles and a Subantarctic Island at Utah's Aquarium “Look, Dad, it’s like I’m in the water!” the young boy excitedly called out...

A TRIP THROUGH THE NEW SLC AIRPORT ALLOWS TRAVELERS TO EXPERIENCE UTAH'S MAGICAL LANDSCAPE WITHOUT EVER LEAVING THE TERMINAL Creating lifetime memories is often the...
Best of Salt Lake City

VISIT THE HANDSOME AMUR TIGER FOR HIS FIRST WINTER AT HOGLE ZOO The days are getting shorter as Utah slips into its beautiful fall and...
X