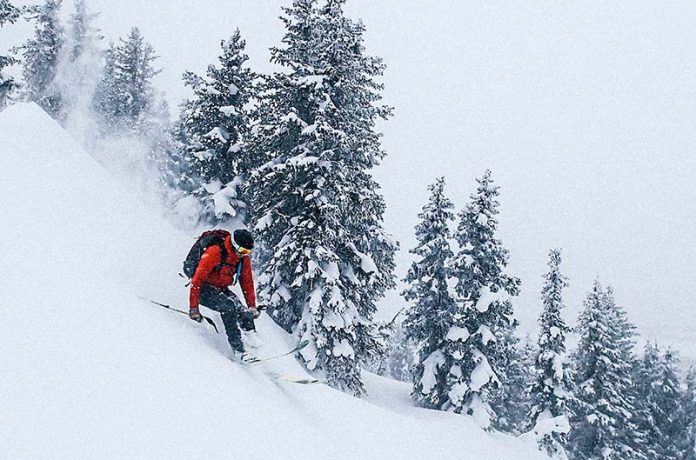 Park City Ski patrollers are there to ensure that every day is the best day on the mountain. Up the hill hours before it is ever touched by the public, their daily ofﬁce offers incomparable views. 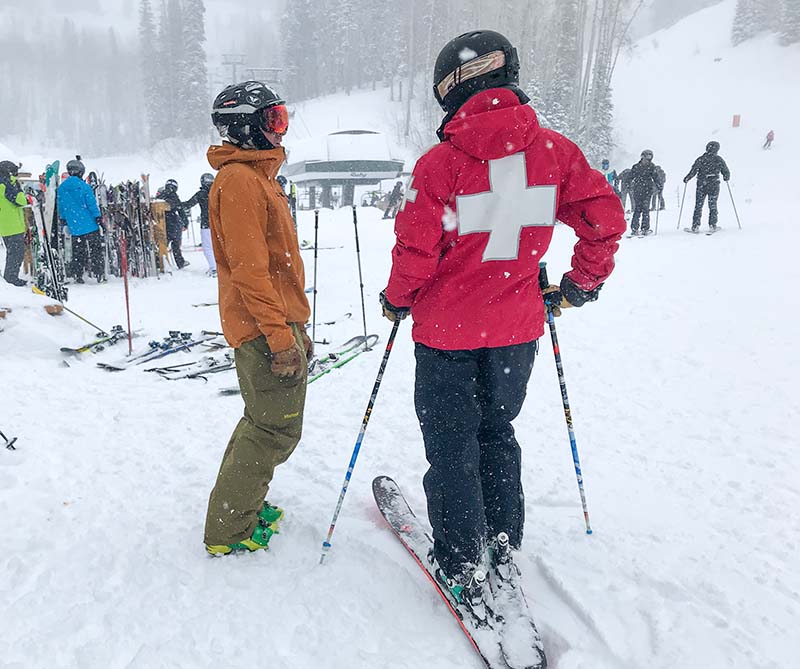 A DAY IN THE LIFE OF A PARK CITY SKI PATROLLER
From long before the sun rises to well after dusk, from the first chair to the last, from the most treacherous peak to the longest bowl, Utah’s red jacketed patrollers know the runs at the resorts better than anyone. Whether taking first tracks after setting the avalanche bombs or sweeping the hills to ensure all of the skiers made it down to the base, for ski patrollers, it is safety first.

A typical day starts with a weather check to determine avalanche control needs. Early in the season, patrollers prepare steep terrain by compacting the snow, boot packing and marching down to help new layers of snow bond to the older layers, all reducing the risk of avalanches later. And their days are filled with rescues and runs.

SHARING SNOW SECRETS
No one knows the snow and terrain of the Wasatch mountains quite like ski patrollers. Over and over ski patrollers are asked, “What’s your favorite run?” Here, now, Utah’s best patrollers share their secrets.

When asked about his favorite run, JB Keller, a ski patroller at Alta responded, “whatever run I’m doing with my friends, because skiing is social.” JB’s right, skiing is social. From chit chatting on the chair lift to cheering each other down the slope to shots of whiskey at the end of the day, skiing builds strong relationships.

Alta’s ski patrol director, Matt Leri explains, “This is going to sound like I’m dodging the ‘favorite’ question, but in all seriousness, my favorite run depends on many factors. The sun shines on different aspects of the mountain at different times of the day, so my run selection is ever-changing to accommodate current conditions with ‘best’ run in mind.” Leri’s advice for skiers is “I think it’s safe to say that your favorite run is more of a state of mind and much like the snow, is ever-changing.” 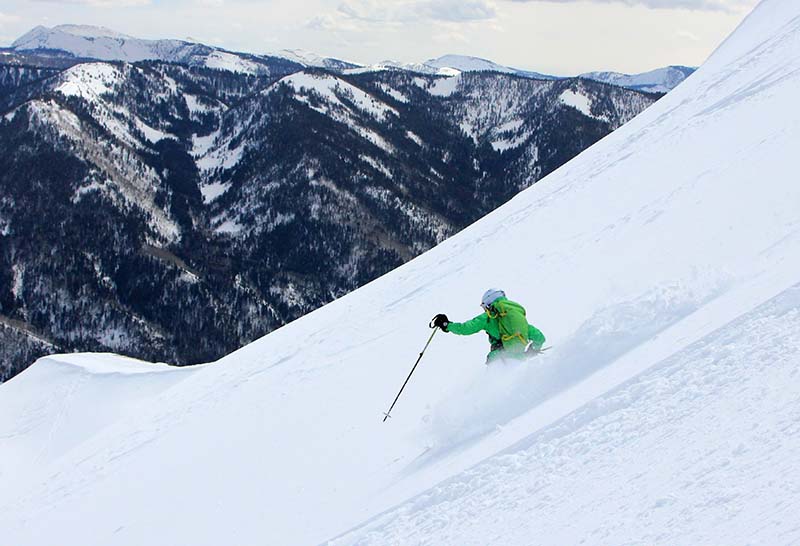 This year, Chris Erkkila starts his 22nd season at Deer Valley. Erkkila explains, “One of my favorite runs is Keno on Bald Mountain. I specifically love the last pitch because of its steepness and when it is groomed (which is very regularly) it is a great spot to pull off some excellent carving turns.” Having been on the mountain for over two decades, Erkkila adds, “I have many other favorite runs, but I keep those close to my chest.”

In Big Cottonwood Canyon, sits Solitude. Mountain Manager, Marvin Sumner, spent 17 years as the ski patrol director. Sumner notes, “I enjoy traversing through the magnificent limber pines and skiing the natural glades in the Black Forest of Honeycomb Canyon when the powder is fresh. It is visually stunning and peaceful.” Sumner concludes, “I’ve skied that area hundreds of times and have never skied the same exact line twice.”

In the heart of the Wasatch Back and home to one of the largest ski areas in North America, Vail’s Park City Mountain is world-renowned. Dani Waite, a Ski Patrol Manager at Park City Mountain shares, “My favorite run at the resort, by far, is King’s Crown off of Payday Run. King’s Crown has the PERFECT pitch to lay the most stylish turns down on the mountain.”

According to Waite, “King’s Crown is consistently groomed to perfection and is always my go-to run to get down to Park City Mountain Village.” Waite has seen skiers “hoot” and “holler” the whole way down and arrive at the bottom with “the biggest smile on their faces.” 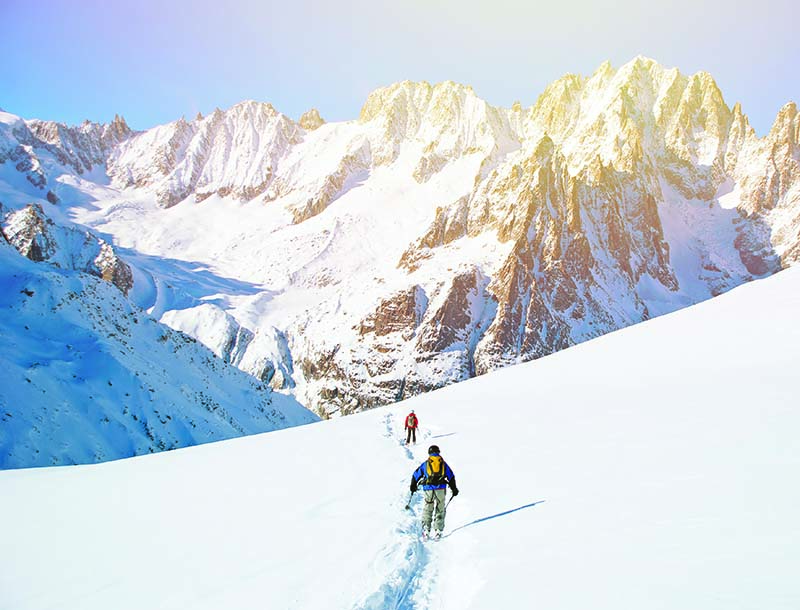 Having spent three decades at Park City Mountain and 21 years patrolling, Lynne Offret is a legend on Park City Mountain. “What’s my favorite run? Aplande.” Offret offers, “This run is a long north-facing trail so the snow surface is always great.”

Plus, Offret continues, “It has a perfect pitch for big powder days and for days when our groomers have laid down perfect corduroy, which thanks to our incredible grooming team is often.” Letting skiers in on another secret, Offret notes that “because this run is on the far north end of the resort, it is a somewhat hidden gem that doesn’t see a stampede of skier traffic very often hence its original name–Stampede.”

In addition to the greatest snow on earth, Utah resorts have the greatest patrollers on the planet—educated, helpful, compassionate, and committed to skier safety and the mountains. Whether you want a long run to cruise, bumps or trees, remember to thank the patrollers who make and keep it safe for you to enjoy.

HERE ARE A FEW TO START WITH ... ZIPLINE Soar across the longest over-water zipline. TRAIN Ride in President Truman's original train car or participate in a live...

A to Z Things to Do in & Around Park City - Park City Summer Activities ADAPTIVE SPORTS Rooted in Park City, the National Ability Center...
Activities + Adventures

HERE ARE A FEW TO START WITH ... ZIPLINE Soar across the longest over-water zipline. TRAIN Ride in President Truman's original train car or participate in a live...
X