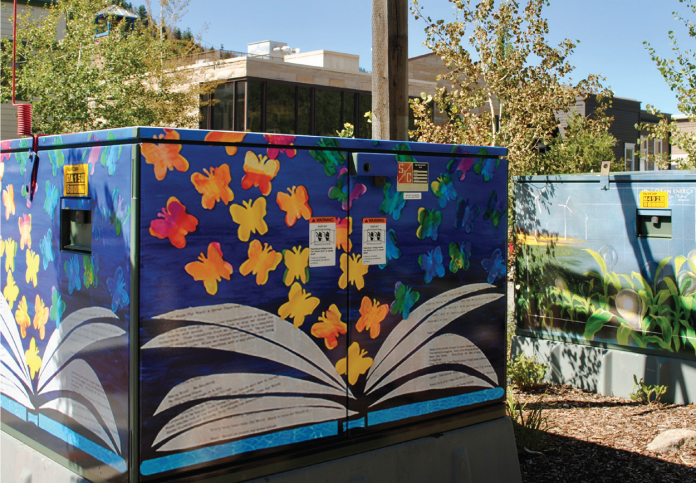 A few years ago, city staffers began getting feedback from the community to transform the transformer boxes—those big, green, boring, square boxes that deliver power to your home. While they might seem an unlikely canvas, you could say the input lit the fuse for what is now one of the city’s most cheerful public art projects.

In her role as Park City special events manager, Jenny Diersen is also the liaison to the Public Art Advisory Board. She helped spearhead the project, working with local artists, community members and Rocky Mountain Power, which owns the electrical boxes.
“The Public Art Advisory Board aims to align our projects with the city’s goals,” Jenny explained. “Sustainability and arts and culture are both top priorities, so this was a great fit.”

In all, 14 Utah artists submitted artwork and a total of nine pieces were selected. Artists received a one-time honorarium and the city purchased the original artwork for its collection.

Nine transformer boxes were wrapped with the artwork in the summer of 2019 and Jenny says she expects the program will continue.

“This began as a pilot program, but we’ve received so many positive responses, we plan to have another submission process this spring,” she stated. “Our goal is to eventually have artwork on power boxes throughout the community.

Learn more about the emPOWERment program, view locations of the boxes or submit your artwork: parkcity.org