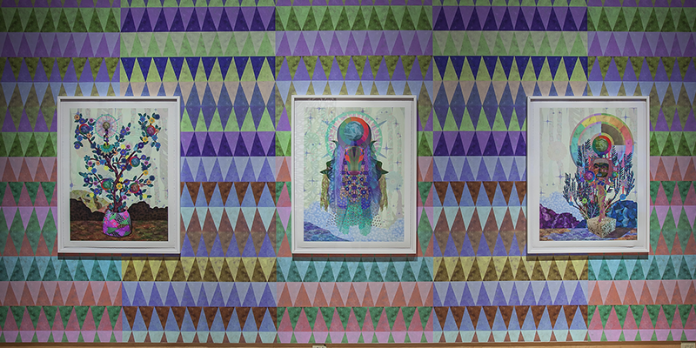 The Kimball Art Center (KAC) has brought multimedia art and culture to the Park City community since 1969 with the debut of the Park City Arts Festival. The old Eley Garage on Park Avenue was the ﬁrst and longest-held location for KAC until 2015. Since then, they have sought out temporary spaces until the opening of the proposed Arts and Culture District. Until then, KAC has found a new home in The Yard which houses four gallery spaces, four educational and hands-on classrooms and café space.

The space is a work of art in and of itself. The KAC team, led by Andy Milliken, spent months creating the ideal floorplan with visitors in mind. The process consisted of placing taped outlines of walls, hallways, entries and exits and walking through mock floorplans. They also worked with the education team to ensure the classrooms had optimal natural light.

At almost 10,000 square feet, there’s plenty of room to explore, learn, and maybe even get a little messy in an art class. High ceilings and broad spaces aid the exhibitions in surrounding the viewer with art.

“I’m excited to use this as a foundation of a larger conversation that will hopefully end up in the cultural district,” said Milliken. “Instead of having a person guarding the art, you walk right into art space. That means I want you to own the space, to feel comfortable in this space. And then I want you to search out the space, all psychologically driven and very intentional.”

The gallery hopes to inspire conversation around the featured art and what is being portrayed or explored by the artist in both technical and social terms. Milliken hopes to pique viewers’ curiosities and leave them with questions to contemplate and discuss.

“There are tourist folks that come here and they come through the exhibitions and get a great tour by our staff. Locals want that great exhibition experience, but they also want to make something for their own voices. They want to relate to the exhibition; they want to be inspired,” Milliken explained.

Kimball Art Center will feature multiple exhibits throughout the year and host classes and educational opportunities that complement the exhibitions for all ages and skill levels.

EXPERIENCE THE HARMONY OF ART THROUGHOUT PARK CITY Research reveals many reasons why humans are so innately drawn to balance—it signals an embracing sense of...
X