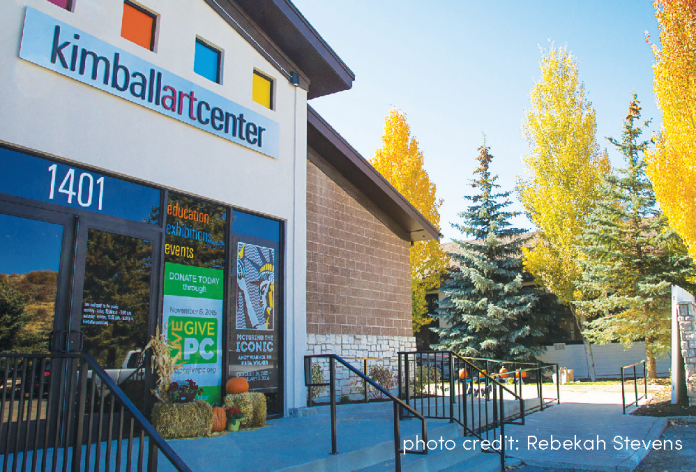 Pop singer Bryan Adams got one thing right, the summer of ’69 was a doozy—especially August. In that month alone, one of the most iconic album covers in history was photographed as the Beatles crossed Abbey Road, and nearly half a million people camped out on a dairy farm in upstate New York for the Woodstock Music Festival. That same month here in Utah, a small outdoor festival of our own launched.

What is now the Park City Kimball Arts Festival kicked off in August of 1969, and this summer the Festival celebrates its 50th anniversary.

“This event is our biggest fundraiser of the year,” noted Kimball Art Center’s executive director, Jory Macomber. “It allows us to further art education in public schools, provide access to the arts to our community and off er scholarships to kids hoping to explore the arts.”

While the Festival is a fundraiser, the Kimball Art Center staff and board also recognize the importance of celebrating their golden anniversary and thanking the community for 50 great years. “That’s why we decided to free the Fest for locals this year,” Jory explained. “Admission is free all three days for Summit County residents.”

Details about the Festival and how locals can claim their free wristbands are available at ParkCityKimballArtsFestival.org.

A WARM WELCOME TO KIMBALL ART CENTER’S NEW BOARD CHAIR

There will be no rest for the weary for one of Park City’s longest established nonprofits. Shortly after the 50th annual Park City Kimball Arts Festival wraps up the organization will swear in Dan Lemaitre as its new board chair.

Dan has served on the Kimball board since 2012 in the roles of treasurer and vice chair. He says he looks forward to building on the Kimball’s legacy of inspiring people of all ages and backgrounds through the arts.

“It is an honor to be nominated to serve in this role,” he said. “The Kimball staff and its board share a vision to expand and adapt our programming and help the city create a vibrant, dynamic and active arts and cultural district.”

Many nonprofits have quotations, stories, and imagery that they weave together to create a beautiful tapestry communicating their culture. At Adopt-A-Native-Elder, “They bring me...
X