Just saying the name—“Revel Ranch”—elicits a spark of joy, and that’s exactly what co-owner Lori Barrett had in mind when she created her postcard-perfect slice of equestrian heaven outside Park City.

“We had to start with the second word: ranch,” Barrett recalls about naming their eight-and-a-half-acre property purchased in 2019. “It felt like ‘rolling green ranch’ seemed to fit with the community. Then, I was searching for a word that was fun to say with ‘ranch,’ but also one that reflected the celebratory spirit we feel here. Because it’s a celebration, and every day that we work with these animals is a pretty lucky day.” 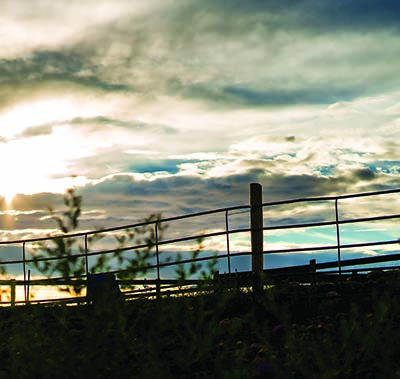 Nestled in the shadows of the Uinta National Forest in Oakley, Revel Ranch is a boutique Hanoverian breeding hideaway, dedicated to producing “beautiful dressage horses that love their work.”

“I wanted a place where I could have my own pipeline of young horses,” explains Barrett, who owns the ranch with husband Jeff Juip, who also works as a commercial architect. “I’m trying to breed horses that could be Olympians.”

To watch an Olympic-caliber dressage competition is to take in an amazing display of strength and agility, athleticism and grace, executed to rhythmic perfection, thanks to the superb synergy between horse and rider. In dressage, the horses don’t trot as much as seemingly float over a pristine sandpit where they perform increasingly complex movements that highlight their light, elastic and ground-covering gaits.

“To me, the big focus was creating a place where there are internationally held standards as well as top-level competitors o learn from, and that there is a welcoming community to be involved in,” says Barrett, whose passion for horses started when she was just a young girl growing up in Houston, Texas.

As the daughter of a stay-at-home mother and general contractor father, Barrett satisfied her equine infatuation by working in barns at just 12 years old, trading her time for lessons. She seized on every available opportunity—clawing her way into the sport by barrel racing and team penning and riding the American flag into rodeos. She discovered dressage by happy circumstance, fielding an offer of an apprenticeship in San Juan Bautista, California, at age 17 while training a horse owned by her grandmother’s neighbor. She was hooked. 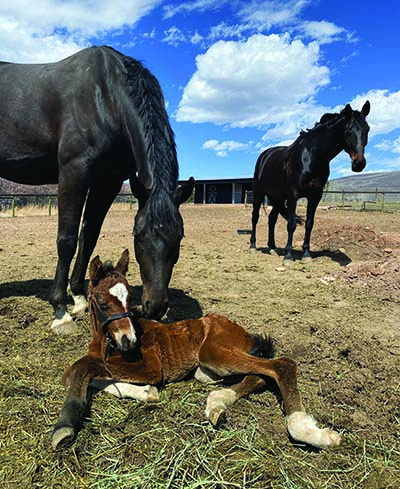 “I have a busy brain—I joke that I have a mental Border Collie, and it likes having something that I’m constantly working on,” says Barrett, who was just 21 when she moved to Germany to work with a trainer at the Grand Prix level, the highest level of modern dressage competition. “It’s the relentless pursuit of unattainable perfection,” she adds, regarding what she most loves about dressage. But that pursuit was met with obstacles when she and her husband first moved to Utah in 2014.

“The first year was hard,” recalls Barrett. “I couldn’t find access or mean to a community or to good coaching, or it wasn’t an inviting place to show up. And so part of my mission in Revel Ranch is to create a place where we can all improve together, where everybody is doing their best. Some of us are further along in the journey, but you show up and you put in your time, and that deserves respect.”

With that experience in mind, Barrett set out to build a ranch that not only is a welcoming environment but also one that specifically encourages and supports women in the sport. Her barn staff, ranch manager and assistant trainer are all women, and Barrett is also thoughtful as to who boards at the ranch. Because boarding space is limited to only a handful, the staff ensure that both owners and animals are on the same page with the ranch’s philosophy.

“I have an incredible group of young women that are learning how to be professionals—and that’s quite awesome,” says Barrett. “We want to create a community that develops good professionals and provides them the opportunity to do so. Also, I get to build this space where everyone is stoked to see everyone around them succeed. And that’s ultimately what it’s about.” 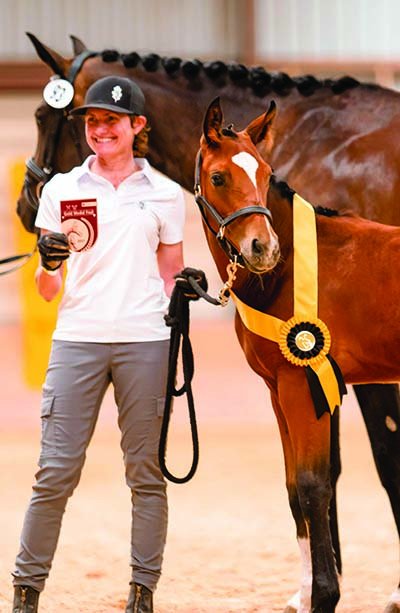 Part of that success is attributed to her ideology regarding the horses’ care. Specifically, Barrett believes the horses need to be outside all day, every day. “They’re out for all the daylight hours because to me, part of making a healthy, happy athlete is making sure that they get to hang out and act like horses,” she says. “It might not be really exciting but we don’t want it to be too exciting, frankly, because that’s how they get hurt.”

Hanoverians, a warmblood horse breed that originated in Germany, were originally used as cavalry horses, but subsequent infusions of Thoroughbred blood lightened the breed to make the horses even more agile and useful for competition. They are bred to be willing and trainable, and their strong backs, powerful bodies and athletic movement make them one of the most desired breeds to ride. What’s more, a Hanoverian has won gold medals in all three equestrian Olympic competitions—dressage, show jumping and eventing. The Hanoverian Society has also been the most successful studbook in international dressage competition, as ranked by the World Breeding Federation for Sport Horses (WBFSH) and International Federation for Equestrian Sports (FEI), since the standings were first published in 2001.

Barrett continues to uphold those meticulous standards, not only through the careful selection and breeding of Revel Ranch mares, but also by providing Hanoverian inspection opportunities and clinics with internationally recognized FEI judges. These professionals include U.S. Olympic team coach Anne Gribbons and 2020 Olympic silver medalist Sabine Schut-Kery, who helped the U.S. win its first team silver since the 1948 Games in London.

“It’s been a labor of love, but it’s made a place where me and my horses can train happily and comfortably, and I can bring in these top-level coaches,” says Barrett. “The barn is safe, light and competition-driven, but still a supportive environment for people to learn and try to get better.”

SERVICE DOGS SAVE LIVES We have all heard that a dog is man’s best friend, but did you know that a trained service dog can...
Ranch + Country

DISCOVER JW BENNETT COWBOY HATS There’s more nuance to cowboy hats than you might imagine. The classic shapes like the 10-gallon hat, the Stetson, Cattleman,...
X