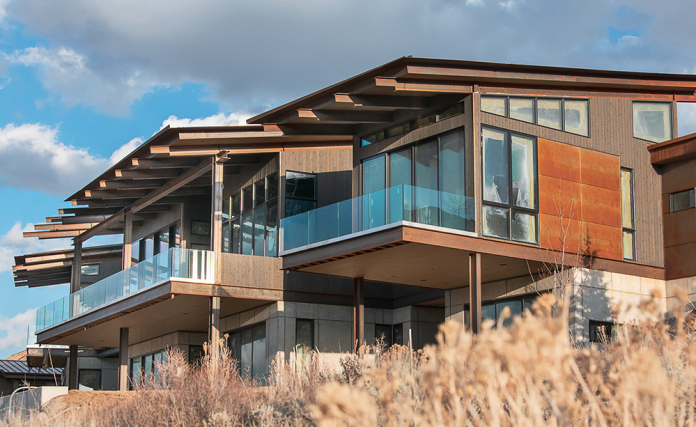 From the street, the River Cabin gives the appearance of a low single-grade home, but as the natural grade falls away and slopes down toward the river, the home takes flight, launching itself out of the ground to be suspended in space, addressing and facing a meadow of wildflowers, cottonwoods, aspens and the tranquil meandering Provo River. 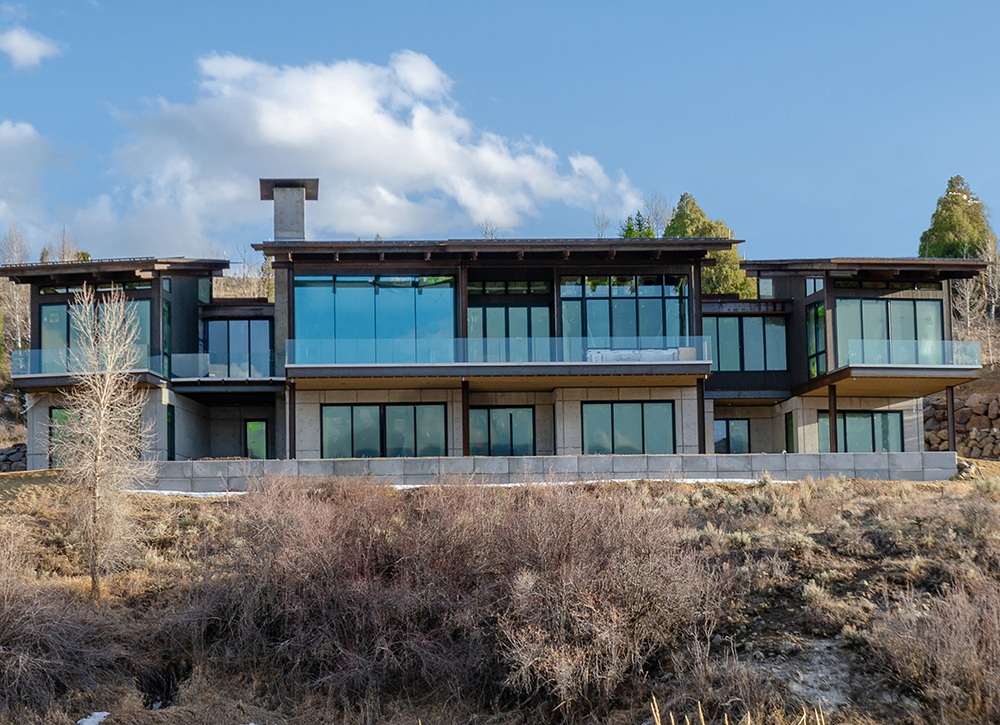 Van Den Berg’s main goal in crafting this structure was to make its integration into nature so flawless that it would seem to disappear and blend into the landscape as effectively and appropriately as possible. Rather than a hilltop imposition, the home comfortably settles into the terroir, similar to how a natural organism would conform and contort to be one with the forces of geology and nature.

Unlike the rustic homes traditional to this area, the River Cabin is a modernist response, with minimalistic and industrial undertones for reasons of low maintenance and durability in the harsh high desert environment. It is meticulously designed with clean lines and durable raw materials, like exposed concrete and rusted Corten steel, selected not only for their ability to withstand the harsh high-altitude climates, but because their properties change over time without aging or weathering, in pace with nature.

“I like the characteristic of materials that adapt, respond to the passage of time and changing of seasons, and have their own identity and personalities,” explains Van Den Berg.

“The materials will allow the building to express itself differently in each season, from the contrast of the white snow to the camouflage of the rust-colored leaves in fall.”

Contrast and balancing opposites is a reoccurring theme in Van Den Berg’s work, often without intention and never with force. He likes to follow a design process that allows for a deep and meaningful level of exploration, observation and discovery of natural opposites and marry them artfully together, creating unity and balance, with a powerful contextual connection to the immediate site and natural environment. “One of the main design concepts of this home is how we pay homage to and integrate. The incredible contrasts of nature—connecting the earth and the sky, the indoors and the outdoors, light and shadow, earth and heaven” details Cobus Van Den Berg. “I think that as soon as you bring the Yin & Yang to design, that’s where it becomes interesting and natural architectural forces overpower preconceived design intensions.” 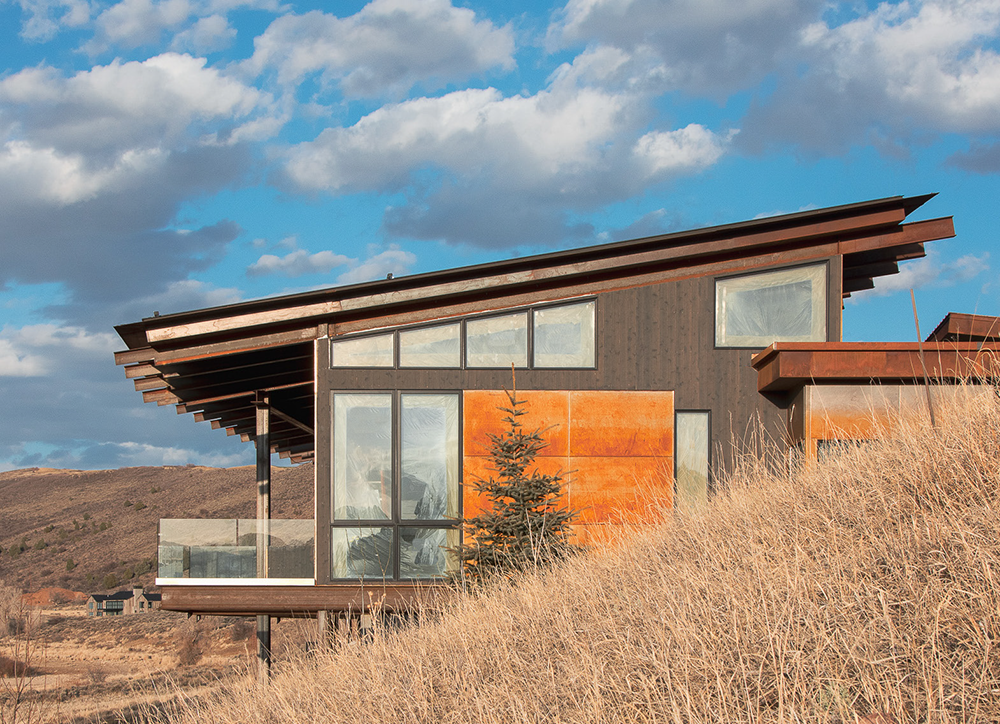 Allowing the building to respond to the natural context and orientation of its surroundings, the interior of the home was kept simple with natural and organic materials, like blackened steel and raw walnut, and a heavy emphasis on natural light. “Natural light is really important to have—it creates shadows, it lightens the interior and it activates the interior spaces and allows for a constant change of atmosphere. When all is said and done, it is all about ATMOSPHERE and LIGHT.”

The challenge of this building was that the main views of the lot were towards the north, but the sun entered from the south. To achieve Van Den Berg’s vision it required he slope the roof in a manner that followed the topography to carve out large high-level clerestory windows that faced the natural passage of the southern sun. This allows the interior to be flooded with natural light and makes the incredible views remain the focal point. “Every time I go into this home, it feels almost like I’m in a suspended observation pavilion on the edge of a riverbank in the wilderness, a place on the edge of a world, staring into another world. A place where I can just sit and observe the natural amazing wilderness that surrounds me, how it breathes and changes and how it looks back and observes me.” 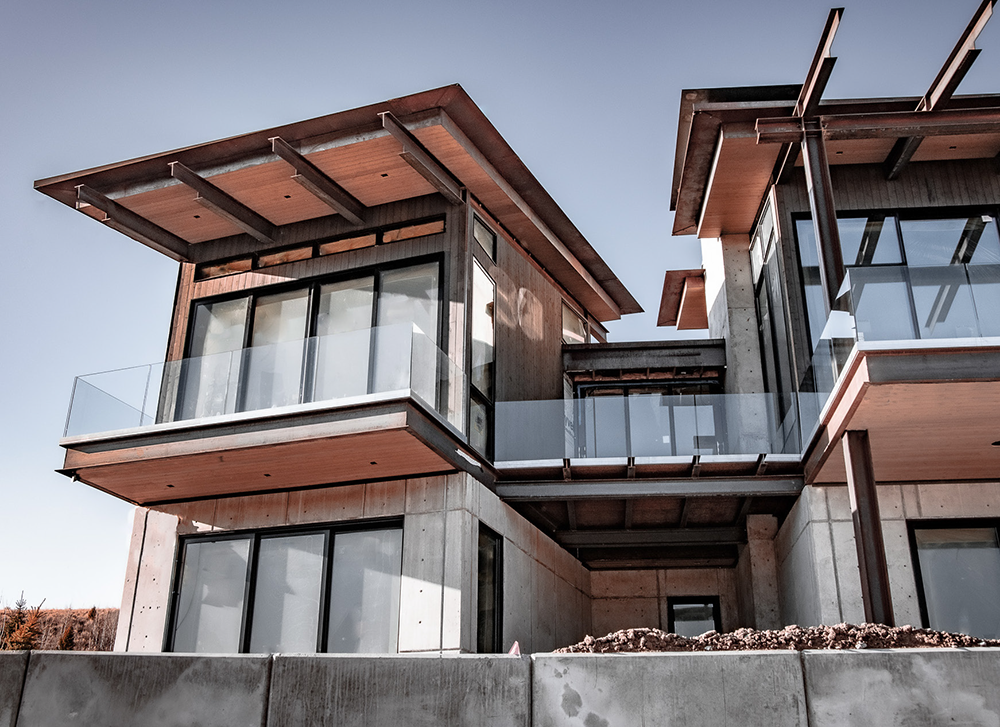 The generously sized home consists of three separate pavilions linked together with fragile suspended glass breezeways: the main living space pod, the master suite pod, and the guest master pod, both of which are on opposite wings of the house.
The interior is intentionally fragmented, meant to be linked with tenuous connections, to create a sense of community and quiet sanctuary.

“The house was designed to almost mimic that feeling of a campground in the wilderness. The main part of the house is like the firepit where experiences are shared, but the bedrooms are like the tents, designed for quiet and private seclusion.”When creating a home of this caliber, Van Den Berg’s visionary work always starts with understanding his client beyond their wish list, and more on who they are as a person. “As an architect you have to develop the ability to read between the lines and develop an acute sense of what they are all about.” He goes to great lengths, intently listening and aligning expectations with their visions to get down to the core of what they may not even know they want. “I think about their needs a lot, I meditate until I think I understand it. And then I take it to another level. If you can go even just another level up that’s how you end up with a pleased client—when you delightfully exceed their expectations.” 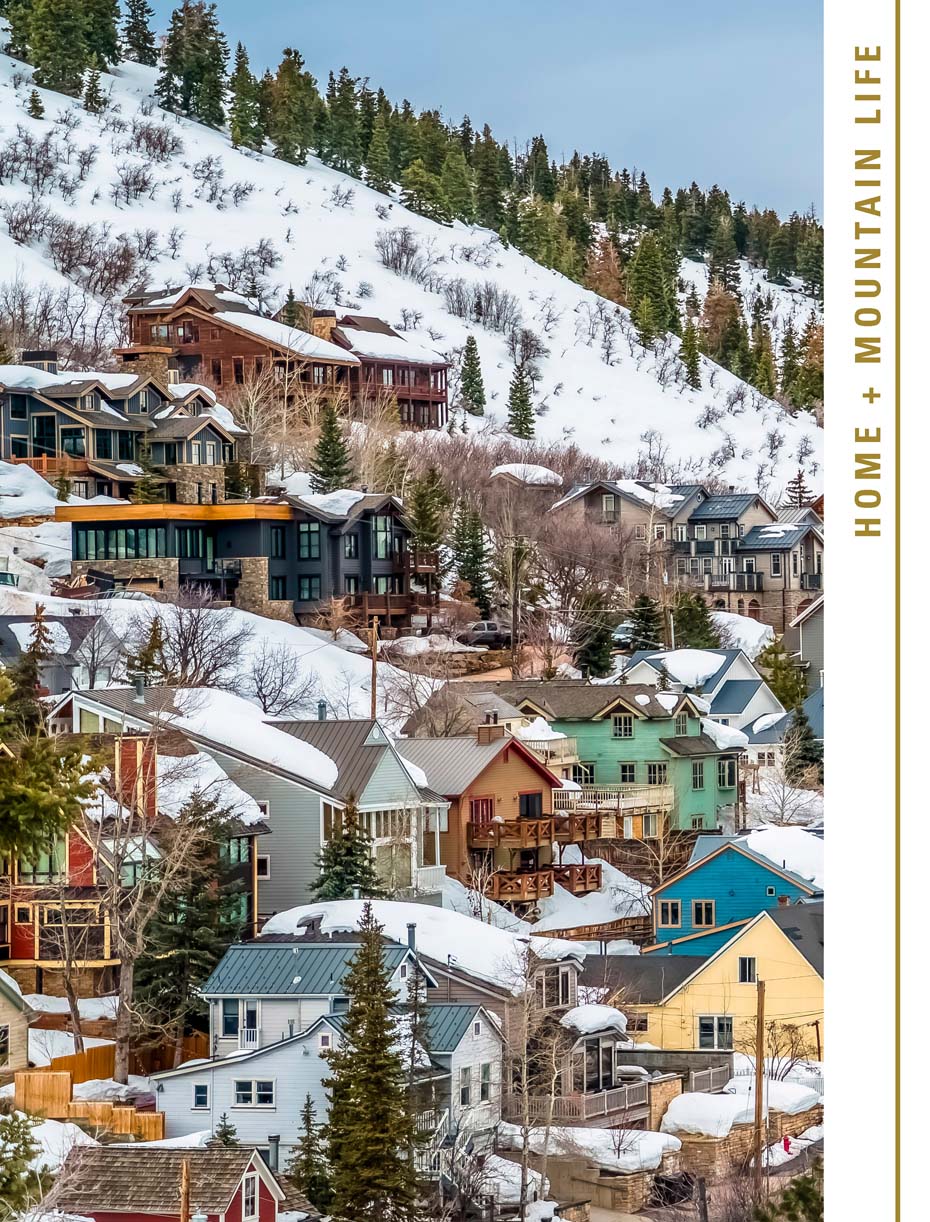 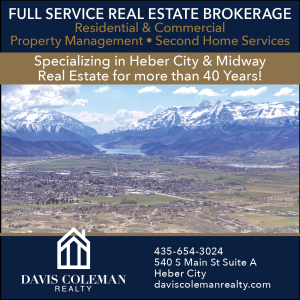 A to Z Things to Do in & Around Park City - Park City Summer Activities ADAPTIVE SPORTS Rooted in Park City, the National Ability Center...
Summer Features

If you’re the kind of person who loves to seek out small town dining gems, look no further than Heber Valley. Located just...
X