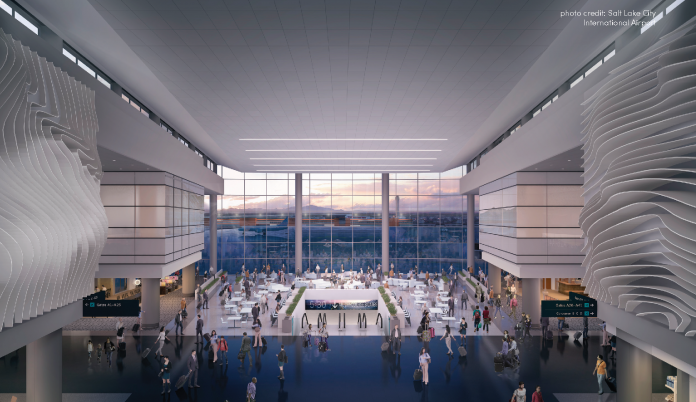 THE FIRST PHASE DUE FOR COMPLETION IN 2020

The $3.6 billion Salt Lake City International Airport reconstruction project is on schedule, with the first phase due for completion in 2020. It’s the first new hub airport to be built in the United States in the 21st century. Some 25 million travelers fly through the airport annually.

Work continues on an all-new, state-of-the-art central terminal, the south and north concourses and an expanded parking garage with 3,600 stalls, twice the number of the old garage and the size of three football fields. In the terminal, security screening and passenger check-in and baggage claim will be much faster. Planned, large-scale art installation will make any waiting more pleasant.

Airport Executive Director Bill Wyatt recently announced the line-up of restaurants and retail shops for phase one of the new airport. Hungry passengers flying through the new airport will choose from Mexican, Italian, Asian and American fare. Among the line-up of restaurants: Café Rio, Market Street Grill, Salt Lake Brewing Company, Smashburger, Squatters, Granatos, Pago, Panera Bread, Silver Diner, Fillings & Emulsions and Shake Shack. Two new eateries, Blue Lemon and Starbucks, will be located in the pre-security area on level one of the new SLC airport terminal. Pricing for both beverages and food at all restaurants will match what customers would pay outside the airport.

Wyatt says airport shoppers will be impressed by the array of retail, news and gift shops selected for the new terminal. “Our team went through an extensive selection process to get the right combination of local, regional and national brands for those passing through Salt Lake City. We are thrilled with the outcome and I think our passengers will be excited with the combination of dynamic shops opening in 2020,” says the Executive Director.

Among the array of new shops, some 29 in all, are Hudson Group, Paradies Lagardere, Sweet Ventures, XpressSpa, Coach, Frye, Hip & Humble and King’s English. Returning shops include Dufry Duty Free and No Boundaries.

Experiencing cultural events, films, galleries, music, theater has been proven to enrich and improve quality of life, whether you’re the actor on the stage,...

Wherever you travel, if you are visiting someone with connections to Utah, there is a chance that you will see paintings and framing from...
X