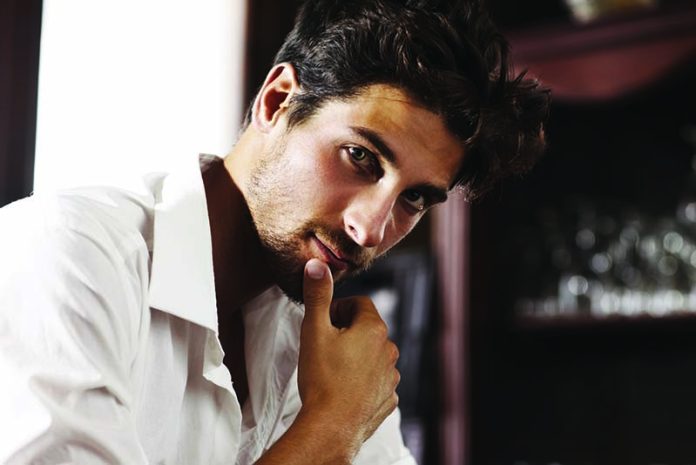 As the Utah distilling and brewing culture continues to grow, so does the selection of spirits and beer available to choose from! Join us for a quick tour of newer offerings on the scene as well as a return visit to a few of our local favorites.

ALPINE DISTILLING
(alpinedistilling.com)
With two stills under one roof, Alpine Distilling produces portfolios of two different spirits—whiskey and gin. Distilling duties are split between husband and wife team Col. Robert Sargent (whiskey) and Sara Sargent (gin), who started their business in 2016 with the aim of creating a brand that reflected their mountain-town community values. That means an emphasis on eco-friendly practices and environmental stewardship, for which Alpine was recognized with the 2021 Utah Green Business Award by Utah Business and Rocky Mountain Power.

While both portfolios have garnered accolades, Alpine Gin was named 2021 “Gin of the Year” in London, 2022 “Best in Show” at the International TAG Spirit Awards, and “Best Craft Gin Distillery” by USA Today for the third time (2019, 2021, 2022). Sara recommends trying Alpine Gin in a favorite classic cocktail, the Park City Negroni, which is on the menu at Main Street’s Alpine Social Club. Alpine’s version also features its Preserve Liqueur, named after Park City’s Swaner Nature Preserve, and is an all-natural blend of blood orange, black tea, raspberry, lemon balm, and ginger in a 100-percent corn base, also making it naturally gluten-free. 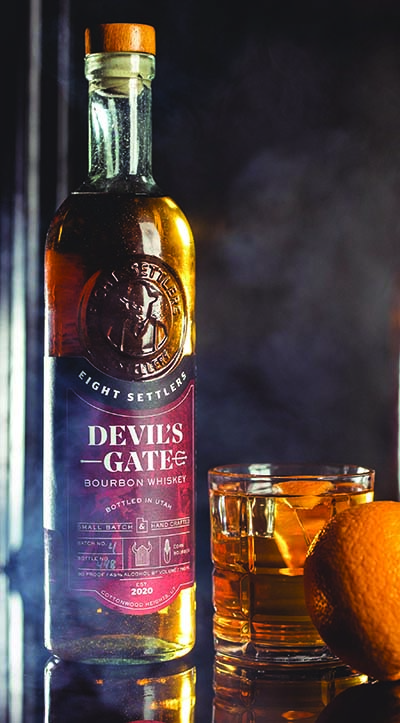 EIGHT SETTLERS DISTILLERY
(eightsettlersdistillery.com)
Opened in 2020, Eight Settlers Distillery was inspired by the beauty and rich history of Cottonwood Heights, an area first settled in the 1800s by eight families. The brainchild of Katia and Radu Dugala, Utah residents for more than 26 years, Eight Settlers offers four craft spirits— Green Ditch Gin, Butler Vodka, Ragtown American Whiskey and Devil’s Gate Straight Bourbon Whiskey, which is also the key ingredient in one of their most popular cocktails, – the Smoked Gate Old Fashioned.

An elevated take on the traditional Old-Fashioned, this cocktail started as a special when the distillery and restaurant first opened, but it became so popular that it’s a fixture on the cocktail menu. Aged in oak barrels in small batches to enhance the oaky, vanilla aroma, Devil’s Gate has a light amber color that implies simplicity, while the subtle taste conveys a sweet vanilla flavor with a hint of buttered bread and the sweet corn flavors you crave.

HEBER VALLEY BREWING
(hebervalleybrewing.com)
What do ski jumping and craft beer have in common? It turns out quite a lot for former USA Nordic athletes and coaches Clint Jones and Greg Poirier, who started their professional “second act” when they retired from their ski team careers to establish Heber Valley Brewing. Opened in February 2019, HVB’s philosophy is to stick with the traditional styles while adding a a non-traditional twist. For instance, their Coconut Girl is a Belgian Blonde aged with shaved coconut, while the Bomegranate Sour is an American sour infused with pomegranate, and the Braambes Saison is a Belgian-style ale aged on blackberries.

This small taproom is constantly changing its beers on tap, but be on the lookout this winter for the “Willa’Tje” (pronounced willa-chu), a Belgian-style golden strong ale. Jones, a two-time Olympian as a ski jumper for Team USA, says it’s one of his favorites—not just because it’s named after his newborn daughter, Willa. Billed as crisp, clear, and approachable, the Willa’Tje still packs a complex, fruity and spicy punch, and at 8.4% ABV, it’s sure to help keep you warm in winter. Pair it with bright or spicy food such as Thai green curry. Enjoy the Willa’Tje in the HVB taproom or take some home from the brewery’s to-go fridge.

NEW WORLD DISTILLERY
(newworlddistillery.com)
Since opening in 2016, husband-and-wife duo Chris and Ashley Cross have steadily expanded their lineup of premium spirits—all fermented, distilled and aged on-site in Eden, Utah. Signature offerings include the Oomaw Gin, Rabbit and Grass Agave Spirits, Wasatch Blossom Utah Tart Cherry Liqueur, Ogden Valley VODKA and their “Uncharted Series” of seasonal and single-barrel releases. The distillery offers tours and tastings with reservations most weekends during the summer and winter, while private tours are available by appointment only.
One standout spirit is the Ogden Nine Rails Bourbon Whiskey, which is both fermented and distilled on the grain, and is a regular sellout on release day. This little-known technique of never separating the solids and organics from the ethanol results in a multi-dimensional bourbon known for its big, bold flavors. It’s bottled at 89 -proof, without additional sugar or additives, and aged a minimum of one year.

OFFSET BIER
(offsetbier.com)
When Park City residents Conor Brown and Patrick Bourque came up with the idea for a local brewery, they envisioned an easily accessible tap room where locals could congregate after a day of biking, skiing, or work. They got all that and more in their Prospector location, which describes itself as “a modern hop-forward brewery with a nod to tradition.” As for the name, “offset” spoke to the partners on several levels, including how they talk about and present their beer as well as their commitment to offset potential negative effects associated with drinking.

To that end, Offset organizes group activities such as mountain bike rides, a run club, and backcountry skiing, which ends at the tap room with snacks on the house! In November, Offset annually donates 50 percent of the earnings on its seasonal pale ale, MoMovember, to a local non-profit that provides mental health services and support to the community. For Brown, the brew that best exemplifies Offset is its first: the L (light) IPA called Dopo, named for the Italian word for “after.” Perfect for après ski or work, Dopo is brewed like a 6.5% beer (but is 5% ABV) boasting modern, fruit-forward flavors and aromas with a hint of resin and pine.

PROVERBIAL SPIRITS
(proverbialspirits.com)
Park City friends and residents Steven Currie, Michael Kunde, and Rudy Lehfeldt-Ehlinger worked together in the film/photo business before joining forces in 2020 to create Proverbial Spirits, a distillery dedicated to using local ingredients when possible and distilling fun into the community.

They created two products, – the Loose Lips Sink Ships Rum and No Rest for the Weary Gin, which is made from Utah corn and Idaho malted rye.

The gin is distilled a second time using botanicals including juniper, coriander, black pepper, cardamom, and the Proverbial’s signature ingredient—blood orange—which combine to create a distinct citrus profile. The spirit works well in a simple gin martini, a citrusy gimlet, or a bold Negroni. Proverbial Distillery’s future plans include the addition of aged spirits and canned, “ready to drink ‘’ cocktails, as well as an expanded lifestyle brand that highlights the cocktail culture.

SALT LAKE BREWING CO.
(saltlakebrewingco.com)
Everything old is new again for Greg Schirf, Jeff Polychronis and Peter Cole, who found themselves in a full-circle moment this past February when they became owners of the iconic Wasatch Brew Pub and Squatters Pub Brewery— for a second time. It’s been nearly 35 years since Schirf opened Utah’s first brewery, Wasatch Brew Pub, in 1986. This was followed just three years later by Polychronis and Cole’s Squatters. The trio became business partners in 2000 and sold the company in 2012, but in a surprise twist, they were offered the chance to buy it back and took it. 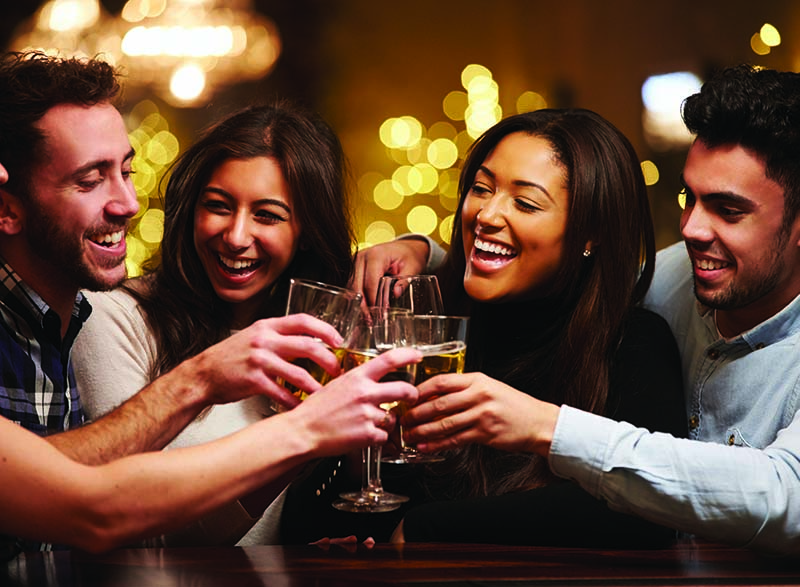 UTAH’S WILD HORSE HERDS OFFER GLIMPSE INTO THE HISTORIC PAST A trip to the “Wild West” and a glimpse into Utah’s historic past is just...
Ranch + Country

FIND YOUR ESCAPE AT RED LEDGES Years ago, Joyce Jordan, rodeo queen, and her husband Tony Burns, settled in the Heber Valley of Utah and,...
X