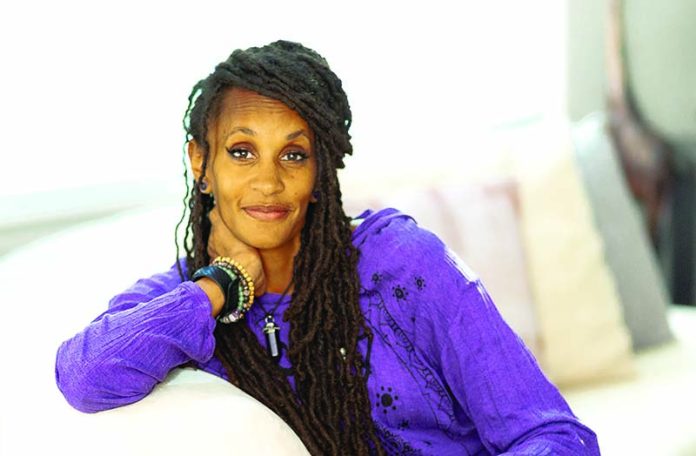 First and foremost, Jenn Lewis is a humanitarian. She explains, “My compassion, empathy, and loving kindness came from my grandfather, Ezekiel. He taught me not to judge people. Everybody got to this point; you have no idea what that person did or had to do to get to today.”

Lewis is also the owner and general contractor of Ghigau Construction, specializing in Park City residential renovations. Ghigau (pronounced heh-go) is a Cherokee title meaning “beloved woman” or “war woman.” With the construction industry’s somewhat tough reputation, Ghigau seems like a fitting title for Lewis’ company. “This is a very male-dominated world. But my mom taught me that you do not give up and do not let them push you aside. If you get knocked down, you get back up. It was the survivor in her that taught me to be this way, to be tough. But, only when needed.”

Being an African-American woman with Native-American ancestry in the construction world, Lewis has learned to navigate bigotry and prejudices. Additionally, Lewis acknowledges that as a self-proclaimed lover and activist of the land, her position as a general contractor may seem hypocritical. However, she mitigates that by only taking on renovation projects to preserve materials, land and animal habitats. “When I founded my construction company, Ghigau Construction, and became my own boss, I promised I would never do a new build,” she said. “I have turned down many new build positions.”

When Lewis moved to Park City in 2005, she started with property management. She then worked for a large construction company learning scheduling, budgeting, contracts, design and architectural processes for ten years. Lewis also learned a lot from dear friend and contractor Doug Graybill, who passed away in 2014. “I had everything that was required by the state to get a general contractor license. So, I passed the test and got my license.” Through these experiences, she met and has maintained relationships with the subcontractors that comprise the Ghigau Construction team today.

As her website explains, “The title of Ghigau was a recognition of great honor for women who made a significant impact within their community or exhibited great heroism on the battlefield. When a woman was bestowed as a ‘Ghigau,’ she was given great honor and responsibility.”

Lewis’ mother, Carol, is a survivor of domestic violence; she fled with her five children in the middle of the night to save their lives. Armelia, Lewis’ great-grandmother was a Seminole Native American who taught her to respect nature, and it will respect you back. From these strong women, Lewis learned to be grounded by the nature around her and to always believe in her abilities.

Lewis has worked as Community Service Chairwoman for the Park City Area Home Builders Association (PCAHBA) and starting in February 2023, is the president of the association. The PCAHBA and Lewis are responsible for monthly community service events like Shop with a Cop, blood drives, Thanksgiving turkey drives, and teacher and essential workers appreciation months. “As president of the PCAHBA, community service is the legacy I want to leave behind. I want our community to be involved, help, and find kindness in each other. That’s my number one goal to help each other out in every way possible.” Lewis also volunteers with Peace House, Summit Community Gardens and the Swaner Preserve, among others.

Additionally, Lewis has founded her own 501c3—The Jenn-LoVe Project, through which she seeks to make an immediate difference. Whether that’s buying food gift cards so people can get a hot meal or supporting those in our community that are using their time and resources to help others.

Her mother— the survivor, her great-grandmother—the grounded soul, and her grandfather—the gentle spirit were powerful influences on Lewis and their impact is expressed each and every day through everything Lewis does

IDEAS TO ADORN YOUR OUTDOOR SPACE - Park City Outdoor Decor Winter is warmly welcomed in Park City and in such an iconic resort setting,...