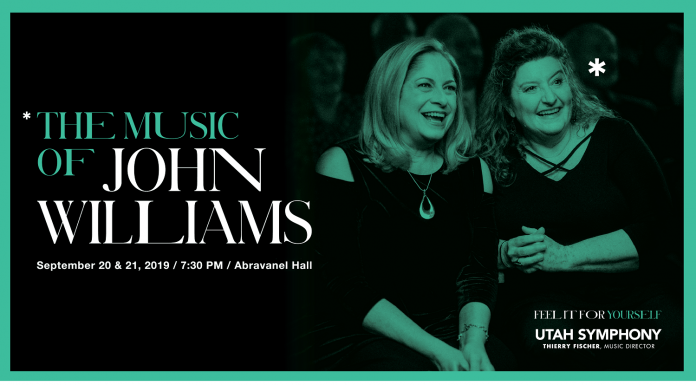 Relive your favorite movie soundtracks played live by the Utah Symphony! Celebrate the composer who scored our lives and gifted us some of the most popular movie scores of all time. With highlights from Jurassic Park, E.T., Superman, and other John Williams scores, this evening of greats is sure to be a hit.
Tickets from $34-$92.

(Prices are subject to change. Buy early for lowest prices and best availability.)

Call of the Champions
“Superman March” from Superman
“Flight To Neverland” from Hook
Music from A.I. Artificial Intelligence
The Cowboys Overture
Music from Close Encounters of the Third Kind
“Devil’s Dance” from The Witches of Eastwick
March from Raiders of the Lost Ark
Liberty Fanfare
Suite from Far And Away
Theme from Schindler’s List (featuring concertmaster Madeline Adkins)
“Hedwig’s Theme” from Harry Potter and the Sorcerer’s Stone
“Harry’s Wondrous World” from Harry Potter and the Sorcerer’s Stone
Theme From Jaws
Theme from Jurassic Park
“Adventures On Earth” from E.T. The Extra-Terrestrial

Join us early to hang out with your favorite John Williams film characters in the lobby, such as Superman and Indiana Jones.

Watch Movies Like A Hollywood A-Lister at Metropolitan Theaters in Park...