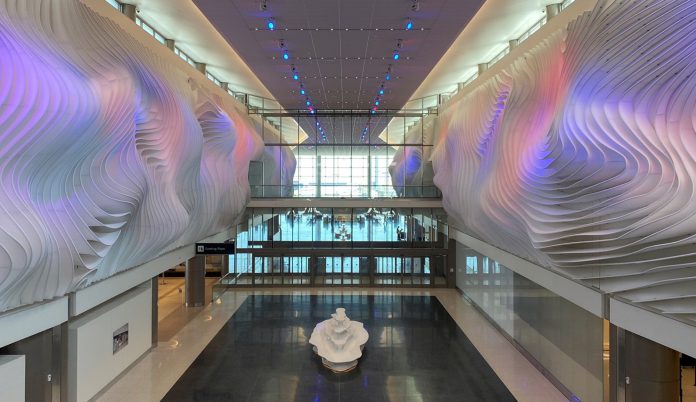 Some things are worth waiting for. Phase One of the new Salt Lake International Airport project opened with the turn of a key on September 15. The lights came up on the all new Central Terminal and Concourse A-west, new home to Delta Airlines. Nine restaurants and a dozen retail stores also opened in A-west. On October 27 Concourse B-west opened, with gates for American, Alaska, Southwest, JetBlue, Frontier and United Airlines.

“This day has been years in the making,” said Bill Wyatt, Salt Lake City Department of Airports executive director, “To say we are excited to be here today is an understatement. Aft er six years of construction and many more years of planning, we are proud to open the first new U.S. hub airport in the 21st Century.”

Though there is more work to be done—the west end of the north concourse will open in 2021—the all new central terminal streamlines passenger check-in, security checks and baggage claims. Many more restaurants and stores will ultimately be scattered throughout the terminal and concourses. Pricing at all restaurants closely matches what customers would pay outside the airport.

State-of-the-art architecture and technology abounds throughout the terminal, including: abundant natural light to reduce energy costs; an expanded parking garage with 3,600 parking stalls, featuring a camera-based sensor system that guides drivers to parking spaces; and a spacious Greeting Room where, post-pandemic, passengers will meet family and friends.

Airport public relations director Nancy Volmer emphasizes no local taxpayer dollars were spent on the Phase One project. Most of the money has come from existing airport revenue and bonding.

Family Based Big Canyon Homes A home is defined as, “the place where one lives permanently, especially as a member of a family or household,”...
Home + Mountain Life