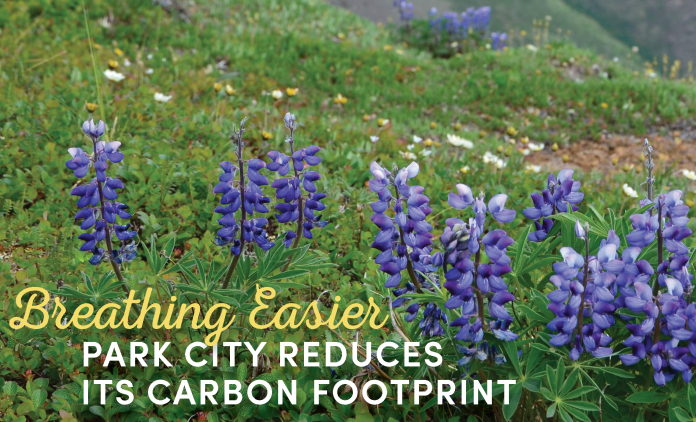 The environmental challenges facing each one of us demand turning good intentions into reality. Individuals, companies and government agencies can set goals to reduce their carbon footprints, but staying the course is what it’s all about.

Park City’s administration has set North America’s most ambitious climate goal: to be net-zero carbon and running on 100% renewable electricity by 2030.

Park City Municipal officers and employees are working hard to increase the amount of carbon the city’s open spaces can trap away from the atmosphere. This means reducing fossil fuel emissions coming from our vehicles, businesses and homes.

Since 2009 the administration has concentrated wholeheartedly on clearing the air. They were the first community in Utah to conduct a community-wide greenhouse gas inventory.

“We are clearing a path for city operations and other communities to become carbon-neutral quickly in a cost-effective way,” Celia notes.

The kitchen helmed by chef Jordan Harvey sources from organic farms and ranches while their bar neatly crushes aluminum cans to aid recycling. Heating and lighting timers shut down energy consumption when the doors close each night.

General Manager Mia Yue says, “There is a lot of waste in our industry. We try to be as conscientious as possible in everything we do.”

Habitat for Humanity of Summit and Wasatch Counties utilizes green building practices on new construction to lower the cost of home ownership for their partner families and to address environmental impacts.

While Habitat is best known for their construction programs, deconstruction is the name of the game at their Park City Restore, according to Development Director Melanie Seus. They stress saving building materials and furnishings when homes are demolished or remodeled. Rather than haphazardly tearing buildings down adding to landfills, Habitat’s ideas involve a great recycling movement.

Habitat’s Restore locations (there are many scatttered around the U.S.) accept gently used donations to resell at their thrift store helping to reduce landfill overload. Last year, Melanie’s crew diverted 620 tons from ending up in waste management.