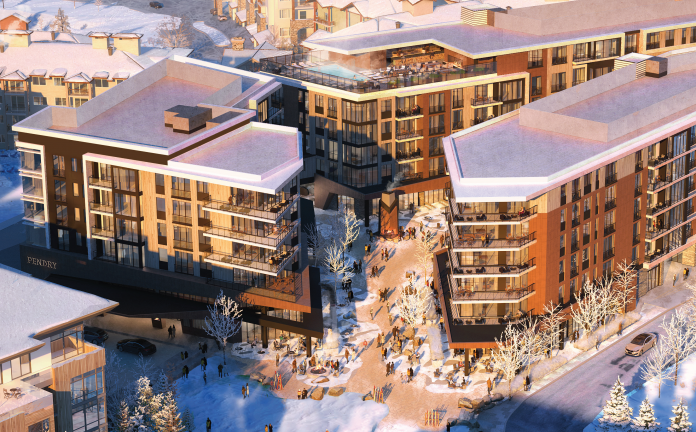 Move over Colorado. Utah is in the spotlight these days when it comes to world-class skiing and alpine living at its finest. The charming town of Park City has transformed into one of the most coveted places to live year round or to own a second home with both domestic and international buyers in the game. While other parts of the country show signs of becoming stagnant, Park City is one of the hottest resort marketplaces in the U.S. with myriad townhomes, sprawling estates and luxury condo hotel projects popping up. So what makes this former mining town the place to lay down roots or invest in real estate? And what can we expect down the road? We spoke to some of Park City’s most prominent real estate agents, advisors and developers about their take on the town and what the future holds for this expanding mountain community.

What’s your take overall on real estate in Park City in 2019?
I believe the future of Park City real estate is bright. Owning a home or commercial property in Park City buys you much more than a building. A buyer gains easy access to world-class ski resorts, a close-knit community that values its natural resources and a piece of our charming history. There is a reason why so many visit our town. Our market is healthy and stable overall. We are seeing a shift to a more balanced market between buyer and seller where before we were in more of a seller’s market. New construction and recently renovated homes are in high demand right now. I don’t think anyone needs to be “sold” on Park City. If you can open your eyes and look around and breathe the fresh air and you enjoy nature and are active—welcome to your heaven.

Where is the town headed in terms of development?
We are starting to see a real boom in development at the resort village at Canyons with lots of contemporary condo hotel projects going in. Mayflower Mountain Resort will be a very large Deer Valley based development with a variety of hotel and residential options. There is also a great deal of growth in the surrounding areas outside of Park City like in Kamas and Hideout with new developments such as Deer Waters by Holmes Homes that are close to the Jordanelle shore and off er spectacular views of Deer Valley. This will be a quiet community offering twin homes some with main floor living, mountain views and close access to the new Jordanelle Parkway, which will allow for easy access to the new Mayflower development. 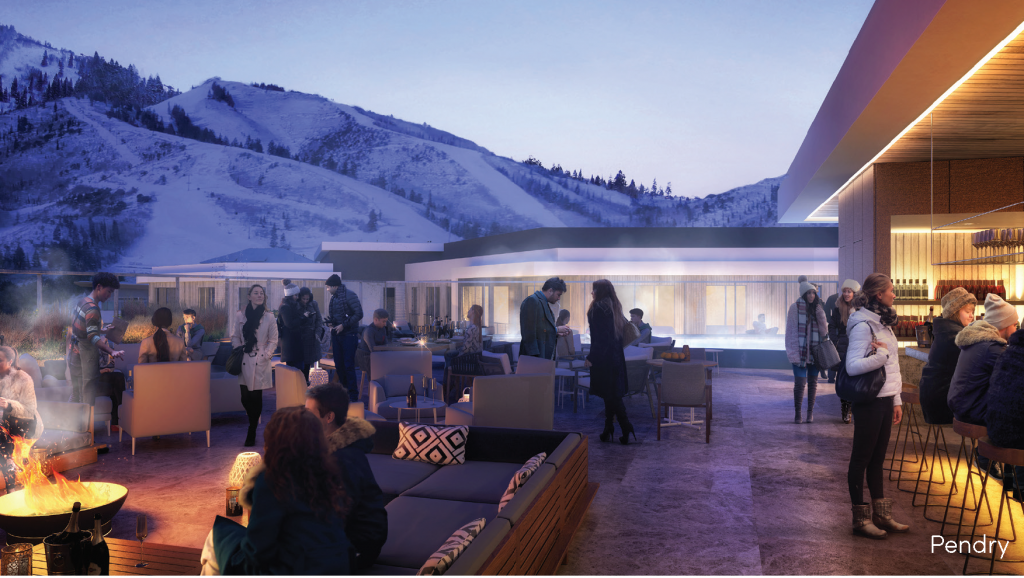 BRIAN SHIRKEN
PRESIDENT OF COLUMBUS PACIFIC
DEVELOPER OF PENDRY & APEX
Development is being driven by the arrival of Vail and the connection of the Park City Mountain to the Canyons Mountain, now branded as Park City, the largest ski mountain in the United States. The $50-plus million that Vail has spent on new lifts, snowmaking and upgrading dining, in conjunction with the Epic Pass, has significantly increased skier visits. The demographic of the Vail Resorts skier is different from the historical one, resulting in a demand for high-end luxury housing. And the two projects we are developing is to meet that demand. The first is Apex, a 63-unit condo project on the mountain above Canyons Village. We’ve already sold 75% and it will be complete by end of the year. We’ve been building homes in Park City for 10 years, and we’ve observed the changing aesthetic from mountain traditional to mountain contemporary architecture. Apex is the first mountain contemporary project with large windows, steel, contemporary interiors and finishes. The market has responded very favorably to that kind of architecture. 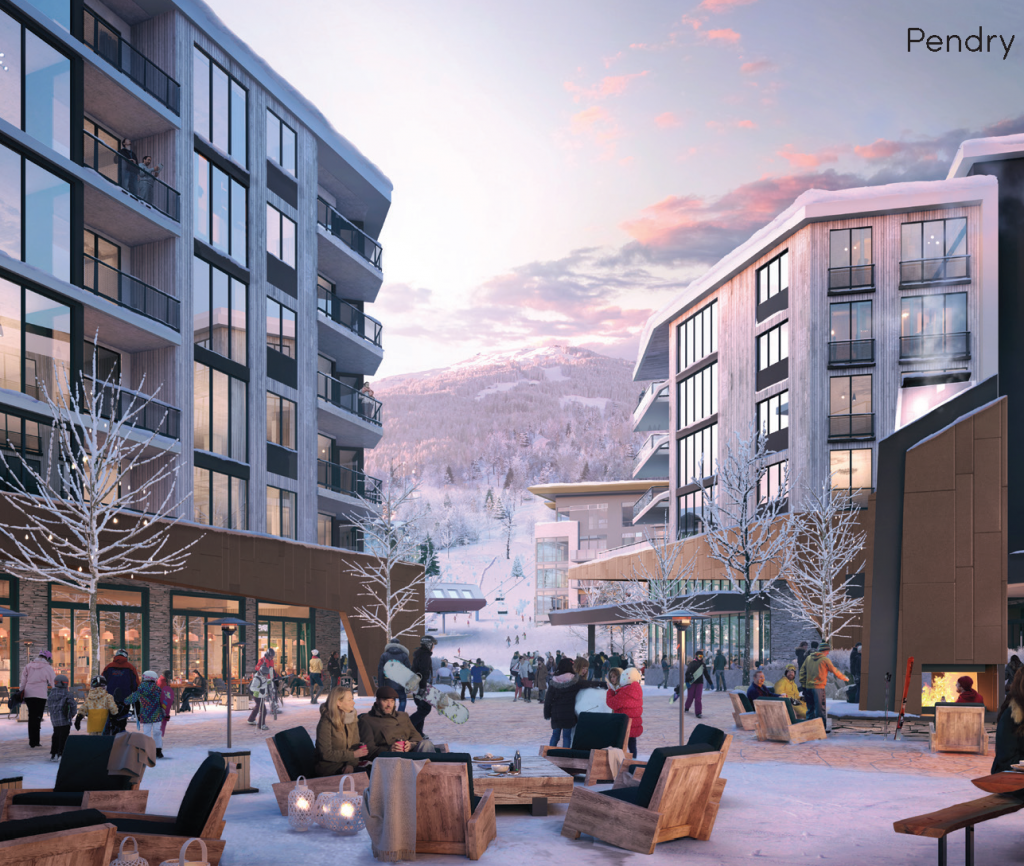 Our second project is Pendry in the heart of Canyons Village, a 150-unit, 238-key condominium hotel with contemporary architecture where owners have the option to allow Pendry, which is owned by Montage, to operate their units as part of its hotel. We launched reservations in February 2019 and we have taken $95 million in reservations to buy the units. We could not be more excited by the response from the market. The hotel will also have a rooftop pool with a bar and grille, a spa, kids’ club and three restaurants that will surround a new ski beach. Outside of property we are looking to create a dynamic après ski scene in Park City. 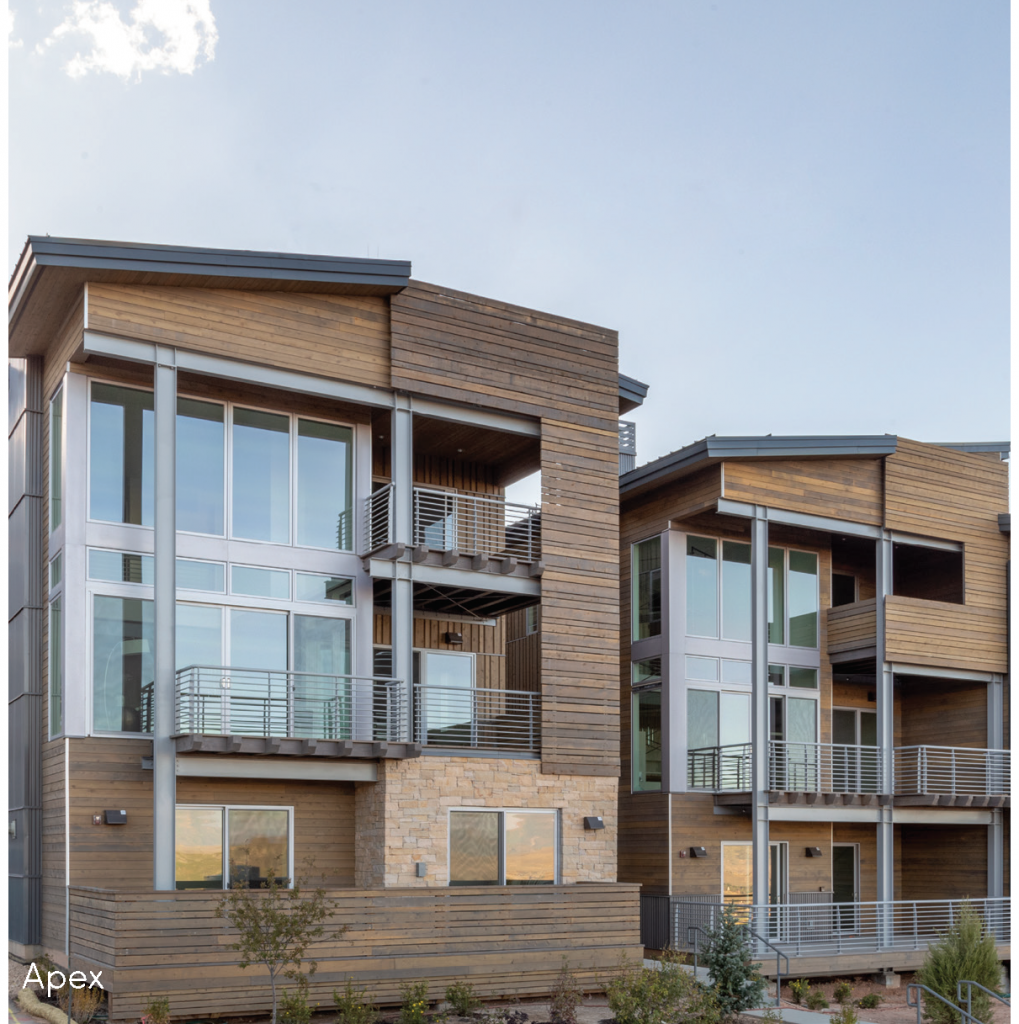 Is there room for all of this growth?
Park City Mountain still has significant capacity for additional skiers and Vail expects to continue to grow skier visits. We expect to continue to grow in Canyons Village as we still think there’s a demand for quality accommodations at different price points. There’s a masterplan for Canyons Village with appropriate infrastructure for the additional growth. As it develops out it will become a really sensational ski destination with all the great housing, restaurants and retail. It will also become a real village.

What’s most striking to you about the Park City Real Estate scene?
Everyone is talking about Canyons Village as it’s undergoing a dramatic change. The push back we get is people asking why all this building is going on, but all of this density was approved back in 1999 before the Olympics. And yes, there’s a lot of construction, but the point is—most of it is already sold. Apex is significant because it’s the first uber luxury residences in Canyons Village on the best development parcel with an 8000-square-foot club house with pool, owners’ lounge and fitness area. It’s truly ski in-ski out to your door. And 75% have been sold at a price point that’s never been seen before in the Canyons—its $2.2 million average is unprecedented. Pendry has $100 million in pre-sales. YotelPad is 60% sold. Only 8 of the 57 townhomes at Juniper Landing are left. 18 of the 22 of Viridian’s condominium residences located along the 11th fairway of the Canyons Golf Course have been reserved before a shovel has even hit the dirt. It’s amazing me that the buyers just keep coming. 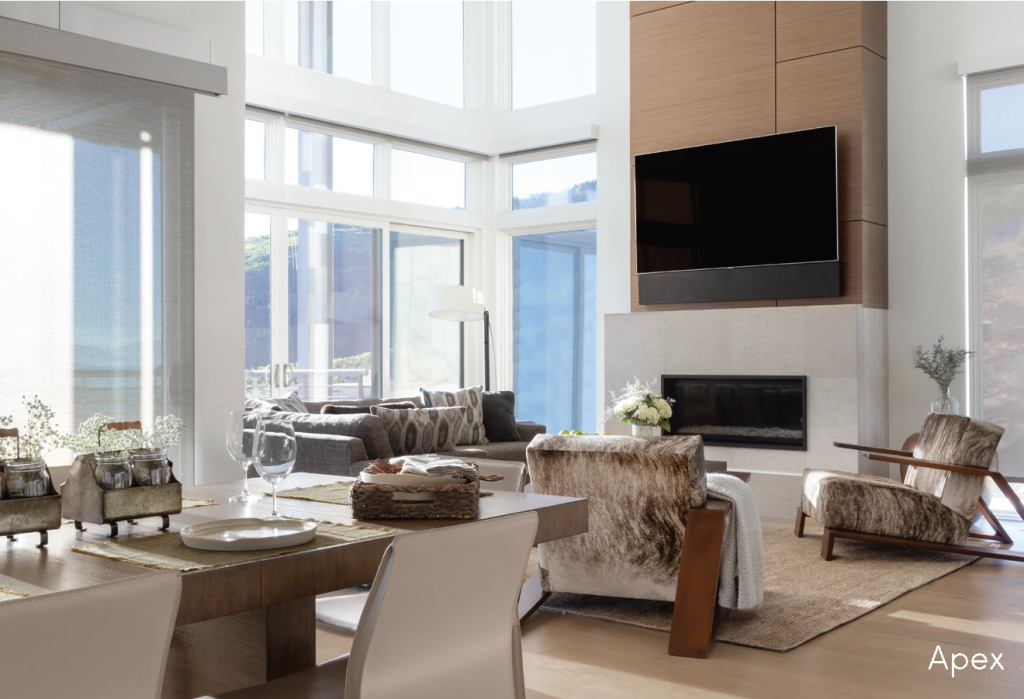 So why do buyers keep coming?
A lot of people are making an exodus from the super high real estate areas and coming here. So many great executives are retiring in the area and bringing a wealth of intellectual horsepower. People are discovering the beauty of Utah, and that it’s a fiscally responsible state with good education, technology and growth potential. We’re a real town with real locals that live here year round. Our trail systems keep getting better, as do our amenities like shopping and dining. Park City offers a great lifestyle, not to mention there’s an international airport only 35 minutes away, so it’s a great base for operation with easy travel. We are going to see more growth. As a local of 28 years, I can say that overall we are even a better community now.

Tell us about the new developments in the Jordanelle area.
The Jordanelle Reservoir, created between 1987 and 1993, is a Blue Ribbon Fishery, with the Provo River upstream and downstream being one of the most prolific trout waters in the country. With its network of hiking and equestrian paths and nationally recognized single-track mountain biking trails and the Jordanelle State Park, this area is prime for development, as it’s only minutes from downtown Park City. The largest and most important driving force in the area is the planned Mayflower Mountain Resort. In 2018, the owners of the long-shuttered Mayflower Mine sold the majority of their remaining holdings adjacent to Deer Valley Resort to Extell Development of New York, who had been in negotiations with Deer Valley for several years, planning a major expansion of the resort eastward to the slopes overlooking the Jordanelle. Their Master Plan, expected to be a long term, 20 to 30 year project, includes some 3-million-square feet of commercial and residential development, making it ultimately comparable to the nearby Canyons Village in overall size. 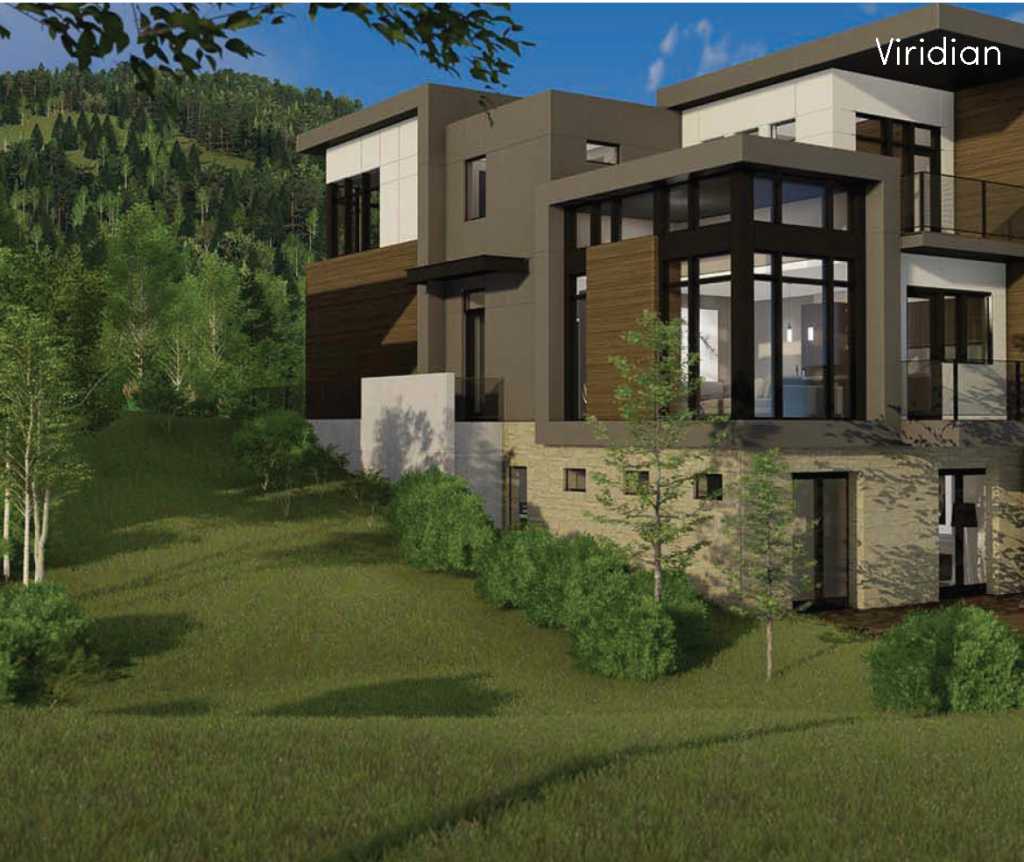 The base village will include the development of up to five new ski lifts, three new hotels, as well as an array of luxury ski-in ski-out homesites, as well as a walkable commercial zone that is, in overall length, comparable to Park City’s Historic Main Street. Ski infrastructure, including lifts, runs, and snowmaking equipment, will be under construction in 2019, with some runs expected to be operational as early as the 2020-21 ski season. One of the hotels will break ground in 2019. The new resort will add over 1000 new skiable acres to the area.

Perhaps most importantly, the new resort will add a second gateway to Deer Valley; being located on Highway 40 south of Interstate 80, the addition of substantial new day parking and the parking required of the new resort itself means the diversion of thousands of vehicle trips through the surface roads leading into Park City proper. The resort is located only 40 minutes from Salt Lake Airport, without a single stoplight along the route.

Military Installation Development Authority, or “MIDA”, formed by the Utah legislature in 2007 to facilitate the development of military land holdings in Utah, will also be involved. MIDA is providing much of the funding for infrastructure improvements and is participating in one of the hotels in the New Mayfl ower Mountain Resort base area. MIDA’s project area includes Extell’s 1000+ acres, as well as several other parcels, including the 664 acre Sky Ridge development at the North end of the Jordanelle, and the 93 acres included in the Mayfl ower Lakeside development. 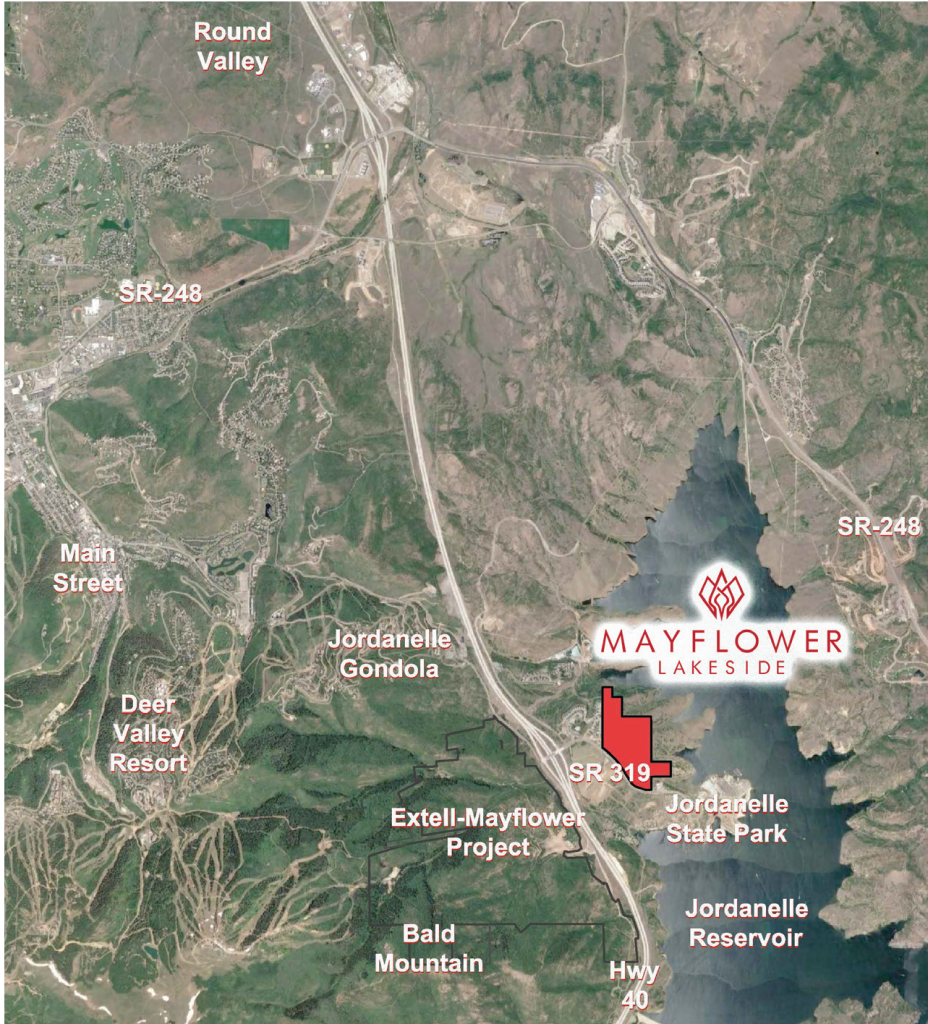 Its location is currently a five-minute drive from the existing Jordanelle Gondola, providing access to Deer Valley’s Snow Park base area, and a three-minute drive to the Jordanelle Marina; combined with its ample green space and trail access, Mayflower Lakeside will be a much sought-after opportunity for a true four-season outdoor lifestyle. The development will include 200 twin townhomes and 180 stacked condominiums when fully built, released in phases over the next several years, many with spectacular views. Th e developer and builder on the project is Landscope, LLC, who has developed much of the existing Shores at Stillwater and Village at the Shores. Construction on Mayflower Lakeside has already broken ground, with road and utility grading and improvements leading the way.

Construction on the buildings begins in July, with completion of townhomes and condominiums expected by early summer of 2020. A great deal of focus was placed on preserving green space in the development, integrating foot and equestrian trails, as well as a Clubhouse, neighborhood parks, a pool and spa, playgrounds and sports courts, all in a setting that makes outdoor recreation effortless regardless of the season. An additional benefit is that the development allows nightly rentals, making the properties ideal second homes with rental potential.

Currently, there are reservations for the majority of the properties in the first release of 24 condos and 34 townhomes. The remainder of the residences will be announced to the public in July, with future releases expected in spring of 2020. Mayflower Lakeside will provide a full mix of world-class skiing access and year-round outdoor recreational activities, with unique opportunities to participate in a major expansion of the largest ski destination in America.