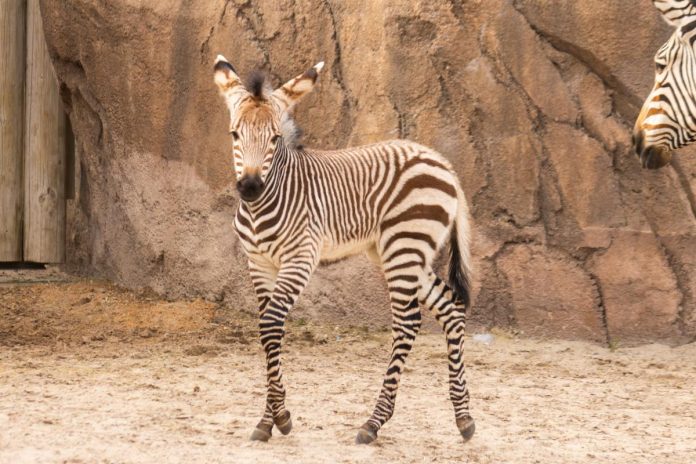 Salt Lake City, Utah (April 27, 2022) – Spring has officially sprung and the zoo welcomed its newest member, a female Hartmann’s Zebra foal named Bryce. On the night of April 14th, Ziva, a nine- year- old Hartmann’s Zebra, gave birth to a healthy foal. This is Ziva’s third birth and according to Michelle Olandese, Animal Care Supervisor “Ziva is an experienced mother which means she does what comes naturally without much staff help.”

Keepers noted that Ziva’s labor and delivery was almost “textbook”; Bryce was successfully standing, nursing, and investigating her surroundings while staying close to mom shortly after birth. Gestation period for Hartmann’s zebra is about 12 months, with one foal born at a time. According to Director of Animal Health, Dr. Erika Crook, “we performed a “well baby” exam at four days old and found her to be very strong and healthy like all of Ziva’s previous foals.” 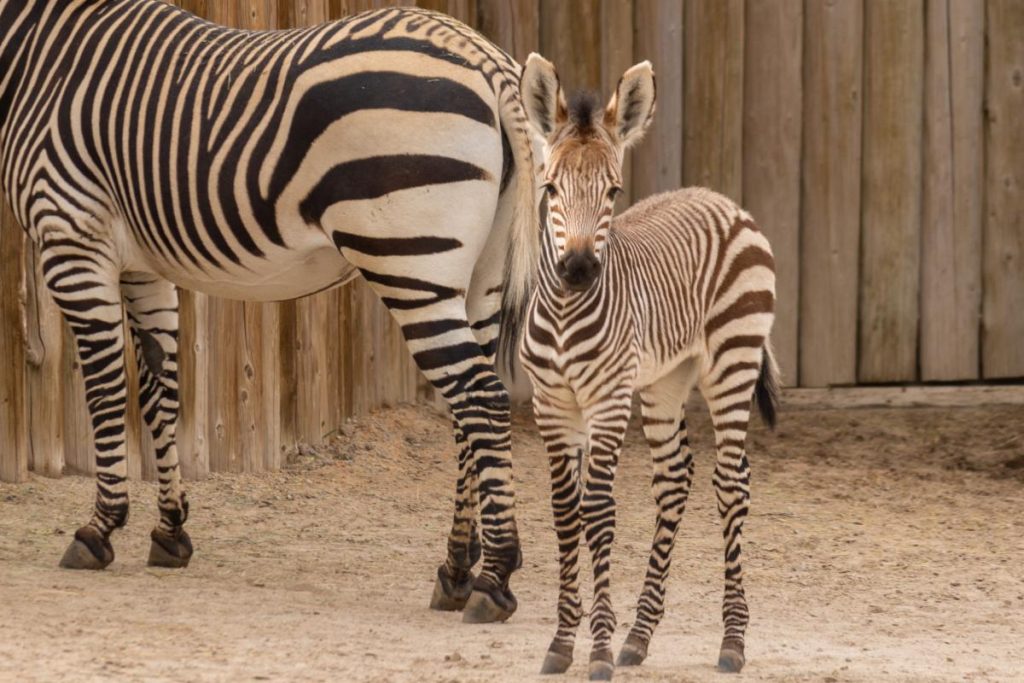 Born January 18, 2013 at the Louisville Zoo, Ziva came to Utah’s Hogle Zoo on a breeding recommendation through the Species Survival Program (SSP) in 2014. She was then introduced to father, Scooby, seven- years of age, who was born at Disney’s Animal Kingdom. SSP looks at the genetic history of animals to find the best matches. A managed breeding program is especially important for animals like the Hartmann’s zebra which are a vulnerable population in the wild. Here at Utah’s Hogle Zoo we now have six Hartmann’s zebras: Poppy, Scooby, Ziva, Archie, Zibby and now the youngest of the herd, Bryce!

There are three species of zebra in the world: Grevy’s (endangered), Plains (near-threatened) and Mountain or Hartmann’s zebra (vulnerable). Hartmann’s zebras can be found in the deserts and semi- deserts of southwestern Africa and at elevations of up to 6,600 ft. At high temperatures, the striped pattern of the zebra may serve as camouflage. Similar to human fingerprints, each zebra has a distinct stripe pattern; no two zebras are alike.

As temperatures start to warm, Bryce and mom, Ziva can be seen at African Savanna exhibit, along with the rest of the herd! The zoo has something for every age, and no two visits to the zoo are ever the same. From a new zebra foal to Amur leopard cubs, there’s always something new at the zoo!

Utah’s Hogle Zoo is a non-profit 501(c)(3) organization with a mission to create champions for wildlife. From mammals to arachnids, protecting wildlife and their wild places are at the heart of everything we do. When conservation is at the forefront of all our actions, not only do the animals benefit, but also our planet. Utah’s Hogle Zoo is a proud member of the Association of Zoos and Aquariums (AZA). Accredited since 1974, (fewer than 10% of zoos across the nation are AZA accredited) we meet the highest standards in animal care and welfare. For more information, please visit hoglezoo.org and aza.org.