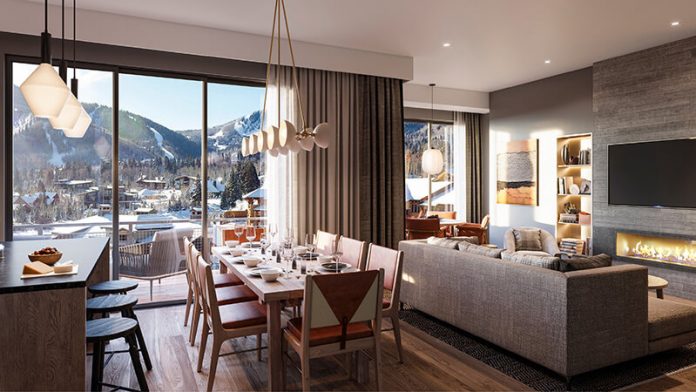 Park City, UT – Pendry Residences Park City, a resort and residential development to debut in winter 2021 in the heart of Canyons Village, experiences continued impressive demand as 80% of the residences have been sold, marking $180 million in total sales. Exceeding $100 million in sales in 2020 alone, only 30 residences remain available for purchase within this luxury mountainside development. Offering spectacular mountain views, ski-in, ski-out ease, and access to Pendry Park City’s incomparable amenities and attentive service, Pendry Residences Park City anticipates discerning buyers will purchase the remaining fully-serviced residences by the end of the 20/21 ski season.

At its debut, Pendry Park City will have the first-of-its-kind rooftop pool and bar in the area, in addition to an active apres-ski and an inspired Japanese-American restaurant. Guests and homeowners will also have access to a family-friendly Rec Room with relaxed American cuisine and arcade games, as well as Spa Pendry with eight treatment rooms; a fitness center; Pinwheel Kids Club; more than 7,000 square feet of indoor meeting space, including a 4,000-square-foot ballroom and direct access to a vibrant pedestrian Canyons Village and over 7,000 acres of explorable terrain.

“Park City is a dynamic destination that has so much to offer year-round, and Canyons Village continues to be one of the most sought-after areas for luxury residences. Pendry Residences Park City will serve as a basecamp of discovery with a wealth of music, culinary, and retail experiences,” says Brian Shirken, president, Columbus Pacific. “This tremendous sales achievement not only speaks to the team’s expertise and the luxury Pendry brand, but also the incomparable lifestyle and proximity to endless outdoor pursuits we’re providing that is resonating with today’s homebuyers. We look forward to Pendry Residences Park City being the heart of the new Canyons Village upon its opening in 2021.”

Matter of Time by Brent Godfrey at A Gallery

Discover Local Art at the 2020 Winter Arts Showcase on...